4 stars of youthful Ninja action in the Hidden Leaf Village. 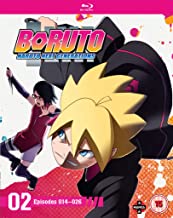 Boruto: Naruto Next Generations is, as the name suggests, the follow on series to the highly popular Naruto: Shippūden. It is based on the manga written by Ukyō Kodachi and illustrated by Mikio Ikemoto. The anime is produced by studio Pierrot (Yona of the Dawn) and directed by Noriyuki Abe (Black Butler: Book of Circus).

“I can’t leave a classmate behind and I never will. Let’s go home Class Rep.” 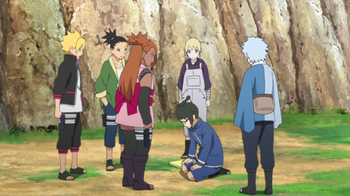 It is now ten years since the end of the Fourth Great Ninja War and the Hidden Leaf Village are enjoying a time of growth and prosperity. Without the threat of war, the village has flourished and now enjoys all manner of modern technology, including trains, computers and handheld games consoles. The Ninja Academy is also now able to offer academic pursuits as well as Ninja techniques and a new generation are learning the ways of the Shinobi. 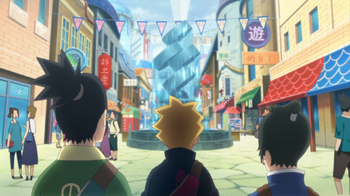 With the help of his mysterious friend Mitsuke (Robbie Daymond – A Silent Voice) Boruto has been able to resolve the situation involving Sumire (Erica Lindbeck – Charlotte) and Nue. 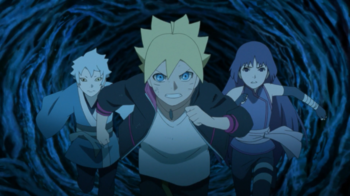 Boruto and his classmates now face an even more daunting challenge, exams! Some of them are struggling, Denki (Erica Mendez – Fairy Tail: Dragon Cry) with his Ninjutsu and Iwabe (Ray Chase – The Testament of Sister New Devil BURST) with his lessons. Fortunately they are able to help each other out.

New three man teams are created, Sarada Uchiha (Cherami Leigh – Mobile Suit Gundam Thunderbolt: Bandit Flower) embarks on a dangerous quest to uncover the secrets of her family and the whole class sets off on what promises to be an exciting school trip to the Land of Water. 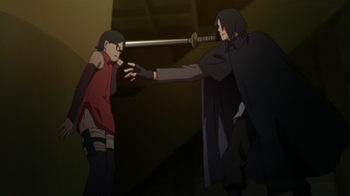 Boruto: Naruto Next Generations is a very enjoyable watch and it’s really good to see how all the familiar faces from Naruto: Shippuden are faring as well as watching a whole new generation evolve into Shinobi just as their parents did before them.

As Naruto always did, the stories are packed with important lessons about loyalty and friendship, without coming across as being moralistic. A must own for fans of the Naruto/Boruto franchise.

“If the Jutsu caster is also in another dimension, then we won’t be able to track them.” 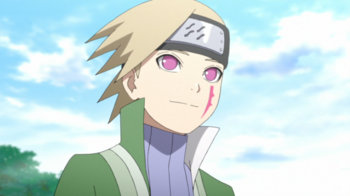 Boruto: Naruto Next Generations is available to buy now on Blu-ray.