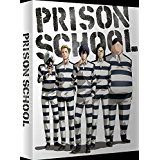 Prison School is based on the manga of the same name written and illustrated by Akira Hiramoto and adapted to anime by studio J.C. Staff (A Certain Magical Index). 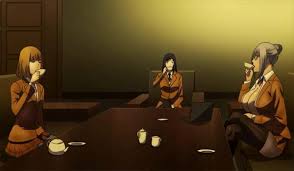 Hachimitsu Academy has a reputation for being one of the strictest girl’s schools in Tokyo. Now however, things are set to change as the board of directors have decided to admit boys into the system. Kiyoshi (Austin Tindle – Tokyo Ghoul) is one of the lucky chosen ones, but when he arrives he is dismayed to discover that he is one of only five boys in a school of a thousand girls. 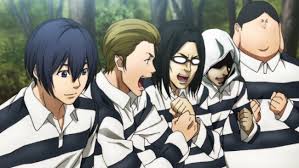 Hopelessly outnumbered, they nevertheless try to make the best of it, but along with Gakuto (Eric Vale – Fullmetal Alchemist, One Piece), Shingo (Clifford Chapin – Good Luck Girl!), Joe (Chris Bevins – Jormungand) and Andre (Sonny Strait – Assassination Classroom) they find their attempts at communicating with the girls firmly rebuffed.

Kiyoshi has a limited amount of success with Chiyo (Kristen McGuire – Yurikuma Arashi), after they discover a shared interest in sumo wrestling and make arrangements to go and watch a sumo tournament.

Frustrated by their lack of success with the ladies, the boys decide to try their hand at peeping, a move which unsurprisingly doesn’t go down too well. They are caught by the Underground Student Council, a scary bunch who sentence them to the obvious punishment for such a crime, a month in the school prison!

With their prison terms overseen by the council themselves, the boys are in for a hell of a time. Mari (Tia Ballard – Fairy Tail), the President of the council, loves crows and has trained hers to attack anyone who misbehaves. 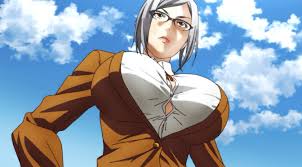 Meiko (Whitney Rodgers – Overlord), the Vice President, is an imposing character with enormous breasts, tough on the boys and a fan of doing weird and wonderful calisthenics in wildly inappropriate places. Last but not least is Hana (Alexis Tipton – Heavy Object), a sweet looking but perverted karate fanatic who takes a very personal interest in Kiyoshi. How will the boys survive?!

Prison School is hilariously funny, but it is 18 certificate for a reason. It’s not for the easily offended, a robust sense of humour is recommended for watching this one. There is little if any censorship, the language is fruity and the unusual viewpoints mean that most of the action is viewed through Meiko’s undercarriage! 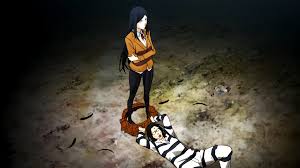 The animation is really good, quite an unusual style, with some nice little animated lego sequences when the boys are working out their escape plans. The comedy is more slapstick (quite literally!) than one liners, visual and explicit sexual humour which makes it laugh out loud funny, a little bit shocking, but somehow never cringeworthy.

Well worth a watch, and worth adding to your collection, just don’t let the kids get hold of it!

“Miracles don’t happen by just sitting around. We have to make them happen ourselves.”