4 stars of amusing and thought provoking coming of age 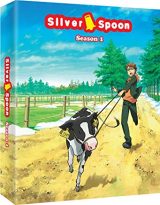 Silver Spoon is based on the manga of the same name written and illustrated by Hiromu Arakawa (Fullmetal Alchemist), It is produced by A-1 Pictures (Your Lie In April, Erased) and directed by Tomohiko Itō (Guilty Crown, Sword Art Online). It is presented here featuring the original Japanese track with English subtitles, in Collector’s packaging, courtesy of Anime Ltd. 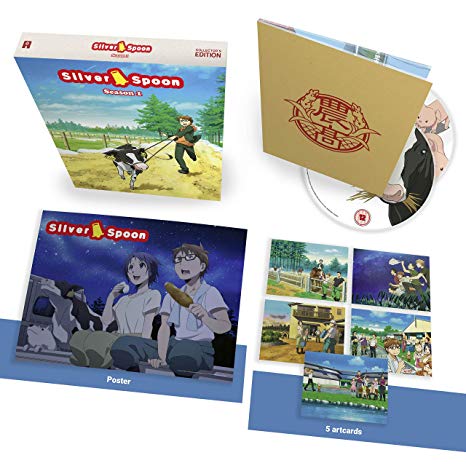 “What’s with this whole, you’re a loser if you don’t have a dream, vibe?”

Silver Spoon tells us the story of Hachiken Yuugo (Ryōhei Kimura – Eden of the East, Mawaru Penguindrum), a schoolboy born and raised in the city of Sapporo. Having failed his entrance exams for the high school of his choice, he elects for a boarding school as far away from his overly strict father as he can manage. 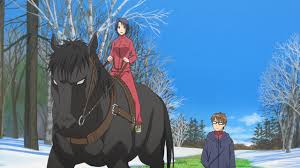 The school he chooses is the Hokkaido Ooezo Agricultural high School, where he joins the Dairy Science department. Hell bent on academic success, he believes that the reduced workload will give him more time for study, but he soon discovers this is not the case at all. 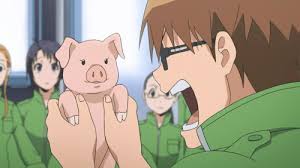 In addition to their studies, all students must complete a series of Practicums, vocational classes designed to teach the arts of farming. It is also compulsory to join a club and the only ones available are athletics, not the sort of thing a city boy is interested in. Simply because his classmate Aki Mikage (Marie Miyake – No-Rin) is a member, he joins the equestrian club, but again that just means more work, as it turns out you have to start at four a.m.

Despite all of this, Hachiken’s strong work ethic and caring nature ensure his popularity and he has several good friends who he tries to help as much as he can. He also brings up ethical questions for them as they were all born into farming families and take the eating of animals for granted, until he encourages them to think about it, as they raise the animals at the school together. 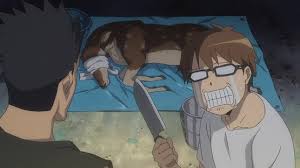 Silver Spoon is a very interesting anime. It raises many ethical issues around agricultural practices and the challenges faced by the farming industry, although some of  the Japanese approaches are a little shocking to Western sensibilities. Despite all of this though it manages not to be at all moralistic. Well written and thought provoking, it is quite engrossing to watch, but still manages to fit in plenty of gentle comedy. 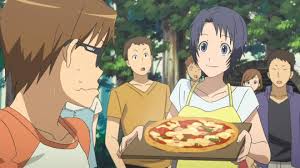 The animation style is very nice and the soundtrack matches it beautifully. Seeing the way that all the characters blossom throughout is heartwarming and Hachiken’s worries about not having a set plan for his future are certainly something with which a lot of people will be able to relate.

It’s slow paced and thoughtful and won’t be to everyone’s taste, but if you love  a good coming of age story then this one is well worth adding to your collection.

“As Winston Churchill said, ‘Dogs look up to us. Cats look down on us. Pigs see us as equals.”