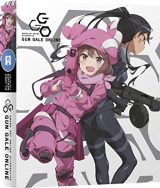 SAO from a Dark Angle.

Masayuki Sakoi (Matoi the Sacred Slayer, Kamen No Maid Guy) takes Keiichi Sigsawa‘s (Kino’s Journey) light novel and brings it to life. In SAO style, where ones real life (RL) does not turn out the way you expected and MMORPG’s are the way for release.

Kohiruimaki (Reba Buhr, Max & Me, Forest of Piano), she has a complex about her height and shies away from human contact.

She needs to be involved in something and her friend and gamer Miyu (Faye Mata, League of Legends, Fate/Apocrypha) has the gamer avatar Fukaziroh. She suggests thjat Karen get into MMO gaming and sends her off to buy all the safe Amusphere gear. (Remember SAO where 10,000 MMO

players were stuck in the game for two years and if you died in game your body died in RL? With only 6,000 making it out alive, MMO’s declined until ‘The Seed’ was developed for the Amusphere gear.). She also gets a copy of ALfheim Online. But these games don’t let you design your avatar, you are given one and when Llenn (Karen) sees that she is tall or oversized she quits the game until on the 37th try she finds her Llenn. A cute high speed character, but what game is she in?

Gun Gale Online, a post-apocalypse world where there are monsters to kill and enemies to take out. Llenn isn’t sure about this world, but it is so different from reality that she thinks she’ll have a go at it and hits the tutorial button.

Building her skills she meets a lone shooter named Pitohui (Pito) (Allegra Clark, Sirius the Jaeger, B: The Beginning) who is a veteran at MMO’s and they make a pact, that when Llenn has honed her skills they will have a duel and whoever defeats the other, they can choose where they meet in RL.

challenge knock out competition, where a team can be for 2-6 players and 23 teams are randomly teleported to anywhere in GGO but no closer than 1KM from an enemy). Pito also has a partner set up for her in the guise of ‘M’ (Ray Chase, Final Fantasy XV, Boruto: Naruto Next Generations). They must win on Pito’s orders. Or there will be severe consequences.

People have skills and people have dark secrets and the ‘Pink Devil’ will rise.

If you are a fan of the SAO franchise this is a must and with a strong female character it should appeal to a wider audience. 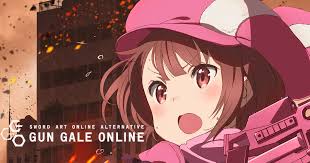