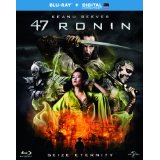 Director Carl Rinsch’s first foray into the big time, big screen, sees a reasonable take on the fictional Japanese tale of the real-life 47 Ronin ,who with no Samurai Master, go on a journey to avenge their master who was tricked into committing seppuku.

Set in feudal 18th Century Japan, we see a young boy fleeing from a forest, shaven headed with long scars upon his scalp. He collaspses in a creek and a young male tries to put an end to the demons life. But Lord Asano stops him, saying that he is a human boy. They go back to the Lords house where he is tended by his daughter. A half breed is not accepted, especially when he is distrusted as a demon. 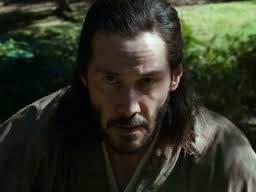 But Kai, (Keanu Reeves, The Matrix) grows up to be a strong young man kept at the fringes of the lords grounds in a hovel. He lives in the beautiful and prosperous land of Ako and there is going to be a tournament over seen by Shogun Tsunayoshi (Cary-Hiroyuki Tagawa, Pearl Harbor). However, his safety is in jeopardy as there is a huge beast roaming the land. The Shoguns go on a hunt for the beast, with Kai tagging along as he has strange tracking abilities. He tells Oishi, (Hiroyuki Sanada, The Wolverine) that the best idea is to set a trap but this is ignored. He tells Asano that the beast is over the hill and they all give chase. Kai catches up with the beast as an un-horsed Yasuno, 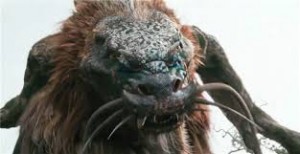 (Masayoshi Haneda, Emporer) lies on the ground with his sword some feet away, the beast sees them and charges. Yasuno cannot move, so Kai rushes forward and slays the beast. But he doesn’t get the credit, it falls on Yasuno.

With the beast dead they all return to the Asano estate where Mika, (Ko Shibasaki, One Missed Call) awaits the safe return of her Father and Kia’s. 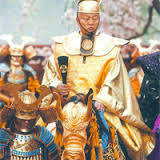 The Shogun arrives along with Lord Kira, (Tadanobu Asano, Ichi The Killer) the lord of the neighbouring Nagato Province, along with his Concubine The Witch, (Rinko Kikuchi, Pacific Rim) who Kai spots, as she has the different coloured eyes of a fox he spotted at the demise of the beast.

He tells Oishi but it falls on deaf ears, as the only way to spot a shape shifting witch is to be a demon and Kai does not want to admit to that.

The tournament arrives and the contest is 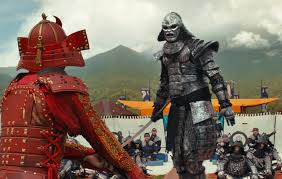 about to start as Lord Kira’s best swordsman takes to the arena, but there is a problem. Yasuno has been bewitched and cannot take part so Kai steps into his armour to take his place. It looks a total mismatch as Kira’s man is huge. The fight starts and it looks bad for Kai, but then he rallies and takes the fight to his opponent. It looks like he is going to take him until the giant lashes out and sends Kai flying along with his helmet, revealing his ruse. Shogun is enraged at Kai not being a Samurai and orders his execution, Mika rushes forward and pleads for his life, which he grants and orders Kai to be beaten. 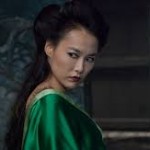 Meanwhile Lord Kira and his witch 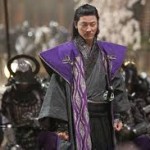 devise their plans for conquering Ako. The witch takes Kira’s essence and turns it into a spider that she lowers onto the sleeping Asano bewitching him into believing that Mika is being attacked, he sees Kira on top of his screaming daughter so he cuts him but all is undone as a host should never attack an unarmed guest.

The Shogun orders that Asano must die but allows him to die with honour which he take. meaning that all his Shoguns are now master-less Ronin.

Mika asks to be the mistress of Ako until she marries, but he has already given Ako to Kira and her as well, they are to wed after a years mourning for her father.

After a year in a pit Oishi tries to get the Ronin back together along with Kai to fight for the honour of their master.

At nearly two hours long this just seems on the long side, but the fight scenes do spark the interest a little longer, the scenery is beautiful, as are the costumes and sets, which keep the eye moving around the screen.