4 stars for this interesting but slightly disjointed anime. 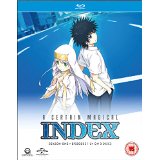 A Certain Magical Index is based on a Japanese light novel series written by Kazuma Kamachi (A Certain Scientific Railgun) and later adapted into two 24 part anime series.

It is set in Academy City, a technologically and scientifically advanced city in Western Tokyo, which consists mostly of highly regarded academic institutions, where students train to release their latent supernatural abilities. This is a world where being able to control electricity, or the flow of materials, or any one of many weird and wonderful talents, is considered quite normal.

The people who command these kind of powers are known as Espers and have their powers from birth. However, most can only gain access to them through the Power Curriculum Programme.

There is another way to gain powers, through mastery of magic, gained from reading Grimoires or using magical artifacts, although this way is clandestine and frowned upon, as the two methods are mutually exclusive. 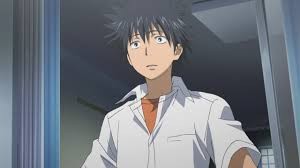 Our story opens with Touma Kamijo, a student who has zero Esper ability, but does have the Imagine Breaker, an ability which allows him to nullify powers using his right hand. He views himself as a failure, as do most others and he is frequently bullied.

His life seems to be going nowhere, until one morning, he walks onto his balcony to find a young girl draped over it, begging him for food. She is Index, a nun with a photographic memory, who has been forced to learn 103,000 forbidden grimoires, the Index Librorum Prohibitorum . As forces rally against her from all angles, Kamijo finds himself compelled to try to help her. 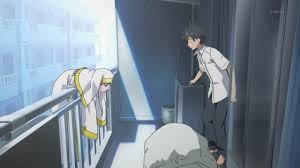 A certain Magical Index is based on a very interesting concept, however, it does feel like it loses track of itself a bit sometimes. The original storyline at the start is far more entertaining than the story that unfolds as it goes on. It does seem to change tack completely every now and again, usually when you have just settled into a rhythm with it.

That aside though, it is full of heart and humour, very enjoyable and I shall look forward to season 2 and to the spin off, A Certain Scientific Railgun. Well worth adding to your collection.

“So just out of curiosity, is this something you make a habit of, randomly appearing draped over people’s balconies?”

A Certain Magical Index is available to buy on DVD and Blu-ray from 14th Sept 2015.