5 Star continuation of Huge vs Little 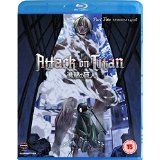 As we continue straight on with episodes 14-25 in this two disc thriller.

Eren in part 1 showed that with a combination of hurting himself and conviction, he could turn himself into a Titan that would take on the other Titans until his substitute body was rendered inoperable.

the city, he now languishes manacled within a cell, with people that have never seen a Titan wondering and fiercely arguing whether he is a boon or a hindrance or a traitor sent by the Titans. Now after the attacks, there are people that believe that the walls are sacred and they hold sway within the councils and they do not wish the scouts to bring harm on their walls from the Titans.

It is decided that Eren will stand before a military tribunal headed by the Commander-in-Chief of the Military, Dhalis Zachary. The two army factions argue their sides of the Eren situation. Afterwards, the commander of the scouts Levi gives him a severe beating, knocking out his tooth to show that the scouts can control Eren’s outbursts. In the end the scouts win and everybody within the scouts seems happy. 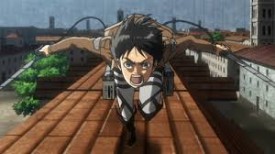 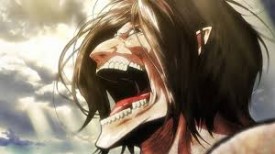 There is still the Titan problem, whatever size they be and the invaded areas need to be taken back especially that of Eren’s home town. But first Eren and Levi’s Special Operations Squad head to the old recon corps headquarters where they will keep an eye on and train Eren in the control of his ability.

With his powers, others of the squad take interest in him, especially the unhinged scientist Hange who has two pet Titans in custody and asks Eren for his input into the Titans, she shows him Sawney and Bean. 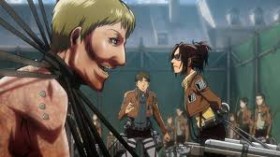 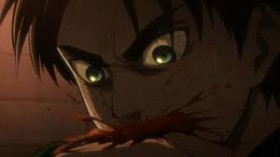 Even though she has them restrained she repeatedly puts herself in danger of being eaten by her beloved pets. But, in the morning, the titans are found slain and a member of the group has gone missing whilst using their manoeuvre gear.

Now the search is on for the killer and to find what is buried in the cellar of Eren’s old house. What is the huge female Titan after and can Eren stop her before all are annihilated?

A great addition to the buzz of Attack on Titan as we delve at a breakneck and devouring speed into the scouts and citizens fate as Titans run amok. 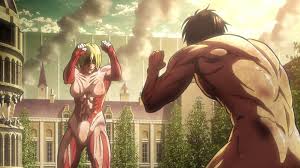 Available to order on DVD and Blu-ray Now.