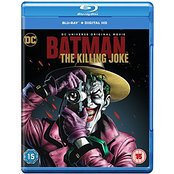 Based on the 1988 graphic novel, this adaptation sticks closely to that tale and reprises Mark Hamill (Star Wars: Episode IV – A New Hope) in the role of the Joker. This is arguably the definitive birth of the Joker. Done in the dark style this is a slick animation that brings the Bat against his greatest adversary.

It starts with a 15 minute prologue told from Batgirl’s (Tara Strong, The Secret Life of Pets) point of view as she recalls how she has worked with Batman (Kevin Conroy, Batman: Mask of the Phantasm) for three years, but she is definitely the lowly apprentice. 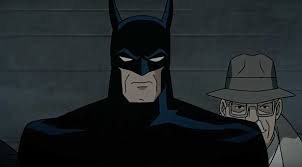 As Batman gets information from Commissioner Gordon (Ray Wise, Robo Cop, X-Men: First Class) Batgirl keeps tabs on her mentor. An armoured truck full of money has been stolen and the dynamic duo give chase, the pair soon find their quarry as Batgirl flies in and blows the back doors off the cover lorry, whilst Batman in his Batmobile fires a grappling hook and pulls out the stolen armoured truck.

Batgirl in her enthusiasm goes after those in the front of the truck as Batman follows up, while Batgirl dodges bullets coming through the roof of the cab. This is where she sees Paris Francesco (Maury Sterling, The A-Team) just before he kicks her off the truck.

Paris’ Uncle Francesco (John DiMaggio, Futurama) is the leader of the local

Mafia and he is not impressed by his nephews behaviour, but Paris just brushes it off as he believes his uncle to be a dinosaur in an electronic age.

He sets about taking over his uncles job with the help of his English goons.

The Bat sign goes up and Batman heads off to find Detective Bullock (Robin Atkin Downes, Suicide Squad) who has uncovered a lock-up full of grotesque masked bodies from three years ago.

of his old adversary the Joker (Mark Hamill, Kingsman: The Secret Service), but what he finds is an imposter. The Joker is loose and looking for a place to set up shop.

As we follow the Joker about we find out about the Jokers past, how he went from a meek worker at a chemical plant to a failed comic, to the most feared man in Gotham.

“You speak and the words are Law?”