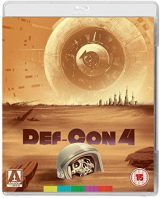 Written, directed and produced by Paul Donovan (George’s Island, Lexx: The Dark Zone Stories (TV Mini-Series)). Made at a time when thoughts were always that World War III was just around the corner, Def-Con 4 addresses those fears of how the human race will survive a thermonuculear  war. Def-Con 4 is the stage at which the film starts, (Just to stop that argument).

High above the Earth, three astronauts keep vigil on our green and pleasant lands. They are Nemesis Mission and they are 407 days into their 600 day mission. Commander Cecil Howe (Tim Choate, Immaculate Conception) watches a message from his wife even though she doesn’t know where he has been stationed. Dr Eva Jordan (Kate Lynch, Meatballs) takes her meds much to the annoyance of Howe, he points out that they still have six months to go and limited medical resources. Meanwhile Captain

Walker (John Walsch) spends his time with space-walks and resting in his bunk with his ‘Walkman’,  as Howe watches the news reporter.

The Nemesis mission hides a payload of nuclear weapons and the news reel does not sound good. Tensions grow between America, Russia and Libya as Cruise Missiles land SE of Moscow and Libya hijacks a boat carrying a lot of Tomahawk Missiles.

Suddenly all hell breaks loose as a priority one message comes through that they are at Def-Con 2 and they should prepare for launch but Howe is hesitant as Walker starts flipping switches and Jordan reports on the explosions miles below them.

Day 451 and Nemesis has heard nothing from Earth but Howe keeps listening to the radio at the same time every night, hoping to hear from his wife Alice (
Donna King, Grease 2). When he does it’s not good, with cities evaporated and now germs have mutated and a disease is spreading through the

remaining populace, never mind the nuclear fallout. It seems that Antarctica and some parts of South America are the least affected. With months of supplies the three are happy to wait it out.

But life just isn’t like that and when a message comes through it is not from anyone they were expecting as the pod disengages from the rest of the ship. It starts heading back to Earth and Walker and his crew have to work quickly to jettison their payload. But one fails to eject and is set to detonate in sixty hours. 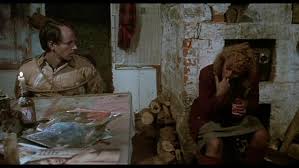 Earth has changed in the few months since the bombs dropped, there are survivalists – Vinny (Maury Chaykin, WarGames, My Cousin Vinny), cannibals and the young ones, that have taken over and are led by Gideon (Kevin King, Iron Eagle) his right hand man Lacey (Jeff Pustil, Casino Jack) and his reluctant girlfriend J.J. (Lenore Zann, Makai tenshô: The Armageddon).

How will they survive it all and can they find a haven on this radiation flooded world?

Def-Con 4 is a real Blast from the Past with full on 80’s emotions and hair. Brilliant. 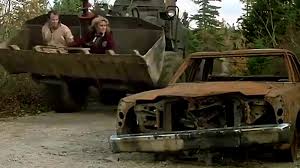 Def-Con 4 is available on Blu-ray.