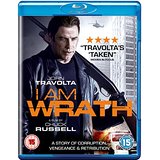 Director Chuck Russell (Eraser) returns to the action genre with I am Wrath, this time with lead star John Travolta (Criminal Activities, The Forger). This is a straight forward revenge film, but with a man with a certain set of skills that aids the vengeance.

The opening credits show the high gun crime and gang land killings and Governor Meserve (Patrick St. Esprit, The Hunger Games: Catching Fire) taking the credit for the halving of the gun crime statistics, whilst people in the gathered crowd protest about a proposed new pipeline. He says that his administration has started an independent survey as well as the

The author of this independent survey is Vivian Hill (Rebecca De Mornay, The Hand that Rocks the Cradle) and her daughter Abbie (Amanda Schull, Women on Top) spots her boss on TV.

Her husband Stanley (Travolta) has been away on a major job interview to run a car plant for Honda after leaving Chrysler.

Vivian meets Stanley at the airport and they head for the airport car park (which surprisingly is deserted) to get the SUV, but as they get there a guy comes up asking for a few bucks for his ticket. Vivian is about to give him some money but Stanley says no and tells the guy with a tattoo on his face to clear off. But before he can do anything Stanley is hit from behind with a tyre iron.

When he comes around he hears a car drive off and Vivian is lying on the floor dead. Later in the police station he meets Detective Gibson (Sam Trammell, Guns, Girls and Gambling) and his partner Detective Walker (Asante Jones, Zombie Strippers). They are not very sympathetic and question his ability to give a clear description of the guy with a tattoo on his face.

They manage to find him, Charley (Luis Da Silva Jr, Triple 9), a known small time drug dealer who, along with his friends, is pulled in about ten times a year. Stanley identifies him from an line-up but he is shocked to see him stroll out of the police station with no charges. Gibson tells Stanley that these types won’t live long so it’s not in the police’s interest to take him to court.

This is a revenge film so guess what, Stanley smashes open a wardrobe wall and pulls out a wrapped package, cutting it open he finds passports badges and money and a barrette and other weapons, he makes a call and meets up with his old buddy Dennis (Christopher Meloni, Sin City: A Dame to Kill For). Dennis has connections and he soon has the names of the three that killed his wife and they are linked to Lemi K (Paul Sloan, Machine) the local drug lord.

This is your standard revenge film, it won’t set any alarms off but if you want an action picture you can add this to the list.