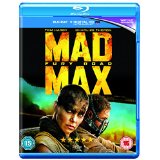 5 Star Best Film of the Year.

In a post-apocalyptic wasteland that stretches forever, 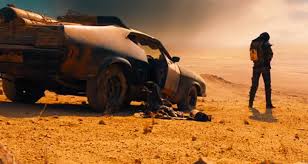 people struggle to survive on a day to day basis, both against the elements and the factions that have a stranglehold on the only resources in the region. The main ones are gusoline (gasoline) and water. But out there is a man who keeps himself away from all that, Max Rockatansky (Tom Hardy, The Dark Knight Rises), the man who was law before the nuclear holocaust and is still a legend amongst the drivers of the wasteland. The man and his machine (the V8 Interceptor) are a valuable commodity. 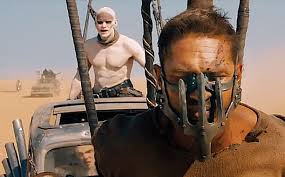 That is why Max avoids contact with others of the wasteland, but the local overlord Immortan Joe (Hugh Keays-Byrne, Mad Max), the tyrannical leader of his “War Boys”, wants Max and his V8 and when he is captured he is used as a “Blood Bag” for a sick war boy Nux (Nicholas Hoult, X-Men: Days of Future Past). Muzzled and strapped to the front of one of the gas guzzling war machines, this is now the life that Max has to look forward to.

That is until one of Joe’s lieutenants takes her War Rig on a journey across the vast wasteland without permission. Imperator Furiosa (Charlize Theron, Prometheus). 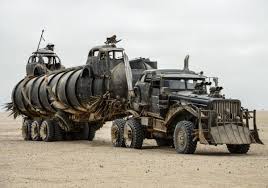 Furiosa is sent to fill up her rig with gusoline at the fortified Gas Town. But she already has a cargo on board, it is Joe’s most important commodity, his wives, his breeding stock,

When Furiosa deviates from her destination, Immortan Joe realises that his wives are missing and he and all his war boys give chase.

This is what we have all been waiting for, marvellous vehicular creations piling across a desert with amazing stunts by humans and vehicles. 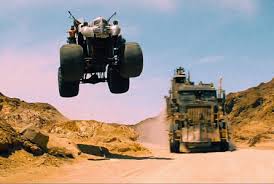 Furiosa has a plan to get the girls to her birthplace, “Green Place” an idyllic region where they can all be safe and well fed. But to get there she has to pass through the area controlled by a biker gang and with Joe and his war boys hot on their heels you know things aren’t going to go well (but it is ace for us to watch). 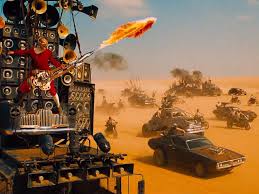 A pure adrenalin rush that has the strong silent type (Hardy) and the strong female character (Theron) and the War Boys all throwing themselves and their vehicles at them.

Will Joe get his wives back, will Max ever get that garden fork off his face and what will the Green Place look like if they can out run the bikes and cars? 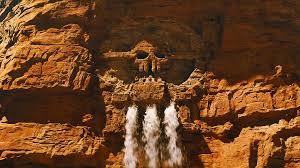 They will all fight to get the spoils of war, Water and Food!

Now sit back, check the petrol tank is full and get ready to hit the wasteland at full speed.