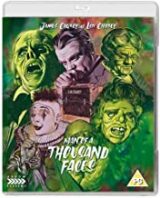 The Legacy of Lon Chaney.

From directing family favourites like Star Trek, The Munsters and The Virginian, Joseph Pevney went on to direct major silver screen stars such as Rock Hudson (Back to God’s Country), Debbie Reynolds (Tammy and the Batchelor) and Tony Curtis (Flesh and Fury). With Man of a Thousand Faces he tells the life story of one of the very greats of that silver screen Lon Chaney (Treasure Island, Oliver Twist, The Hunchback of Notre Dame, The Phantom of the Opera, The Unholy Three). The man could make the awkward and twisted body a thing that made money for the studios of Hollywood.

Yankee Doodle Dandy) plays the Hollywood great Lon Chaney who after his death literally brought the movie industry to a standstill out of respect for his talent.

It is the early 1900s, actor Lon Chaney is working in vaudeville with his wife Cleva (Dorothy Malone, The Big Sleep, Written on the Wind). They are

working hard in terrible conditions but it is Cleva that is the most awkward and due to her tardiness Lon quits before they are pushed.

Lon had a hard childhood due to him having to beat up all the kids that took the mickey out of his deaf and mute parents Pa Caney (Nolan Leary, Pollyanna) and Mrs Chaney (Celia Lovsky, Star Trek, Soylent Green). 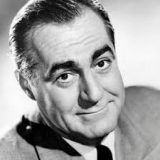 Cleva drops a bobshell on Lon as they quit the vaudeville, she is pregnant. Lon is happy and Cleva knows that he has had a job offer from the famous comedy team Kolb and Dill for an upcoming show. This is where Lon meets press agent Clarence Locan (Jim Backus, Rebel Without a Cause, It’s a Mad Mad Mad Mad World) who would become a life long friend.

Cleva has never met Lon’s parents and he is reluctant to take her as he has never spoken about them. When they arrive Cleva is shocked and reviled thinking that her baby my turn out the same way and she tells Lon that she doesn’t want the baby, but she will give birth to it.

Time passes as Lon works hard and baby Creighton is ok but Lon practically shuts Cleva out for her comments before Creighton was born. This leads to many strange events in the Chaney family as their relationship tumbles.

Lon finds solice in chorus girl Hazel Hastings (Jane Greer, Sinbad, the Sailor, Station West) who spends her time caring for Creighton, but Cleva doesn’t see it that way nor does Hazel’s ex-husband.

With Lon believing he is washed up Clarence tells him that he should try out Hollywoodland. The rest is history.

“We’ve got to talk about this.”

“Surprise, Lon, for once I don’t want to talk anymore.”

A stellar performance from one of the Hollywood greats about one of the greatest. It’s great to get an insight into the life of a man that made the quirky famous.

Man of a Thousand Faces is available on Blu-ray