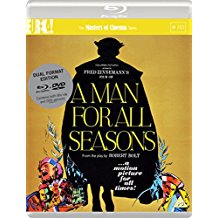 Eureka bring us the 1966 Academy award winner, winning six, including Best Picture, Best Director and Best Actor. This is #163 in their Masters of Cinema series. From the masterful direction of Fred Zinnemann (High Noon, From Here to Eternity, Day of the Jackal), he gives us the biography of a man who stood up against a King.

1529 England and Cardinal Wolsey (Orson Welles, Citizen Cane, Touch of Evil) sends out a summons for Thomas More (Paul Scofield, The Train, The Crucible). More lives in Chelsea and when the runner gets to his house where he is entertaining his family and his friend the Duke of Norfolk (Nigel Davenport, Chariots of Fire, Greystoke: The Legend of

Tarzan, Lord of the Apes), everybody knows why he has been summoned. The King Henry VIII (Robert Shaw, Jaws, The Sting, From Russia with Love) has his failed marriage to Catherine and their heir-less relationship. He wants to marry his mistress Anne Boleyn. But first he wants to obtain a divorce from the Vatican.

When More arrives at Hampton Court Wolsey vehemently inquires why More is the only one that opposed his proposal to put pressure on the Catholic church and their assets in the country to force the Vatican to allow the divorce.

More, a former lawyer cannot agree with the Cardinal or his policies as More has given his word to God and himself, and he cannot change that. During their conversation, the Cardinals aid Thomas Cromwell  (Leo McKern, Rumpole of the Bailey, Ladyhawk) has been listening at the door, never a good thing at these times.

When More returns home he finds Richard Rich (John Hurt, Alien, Tinker, Tailor, Soldier, Spy. V for Vendetta) has waited for him the whole night. He is eager to acquire a position at the Royal Court, but More is steadfast in his denial of this idea. He tells Rich that he will pay him fifty pounds a year to be a teacher at his new school, but this is far below the expectations of his Royal ambitions.

war after his death if he does not produce an heir to the throne.

When Henry declares himself the head of the church of England and marries Anne and Cromwell get all of parliament to sign a decree acknowledging the union More is the only one who refuses to sign it, but he gives no reason why. Keeping silent so that the law will be on his side.

A fascinating piece of history, now laid out in a magnificent 4K restoration and with Academy winning cast and crew you are in for a treat.

·         A Booklet featuring a new essay on the film by James Oliver and archival imagery. 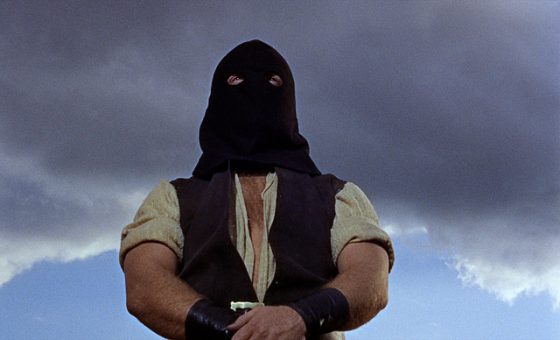