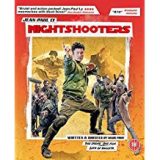 Writer/director Marc Price (Magpie, A Fistful of Lead) brings us a feast of action, blood, martial arts and bullets, in a dark comedic way that draws you in to each of the characters, whether they be the goodies or the baddies. Nightshooters is a great film for any horror or action fan and it comes across as a much bigger budget film than what it was filmed for.

Welcome to the set and the behind the scenes access that we are afforded in the filming of ‘Dawn of the Deadly’. This is a Zombie film, shot by a Guerrilla crew, in a pair of disused tower blocks that have been rigged for demolition. They have the use of it till the morning, when the blocks are scheduled for their demolition, so the

crew are under pressure to get the shots done tonight. The crew consists of Marshall the uptight director (Adam McNab, Viking Siege), Oddbod the annoying sound engineer (Nicky Evans, Adult Babies), Ellie the FX specialist (Rosanna Hoult, Kill Your Friends), Donnie The stuntman (Jean-Paul Ly, The Take Down), Jen the DoP (Kaitlyn Riordan, If I Were You), Kim the Clapper and runner (Mica Proctor, Bait) and Harper the drunk star (Doug Allen, Anti-Social) who does his best to annoy the rest of the crew.

As they get ready for the new shoot the sound-guy complains about about the noise coming through his cans, somebody has got their phone turned on and as it searches for the non-existent signal it makes a noise that the recording equipment will

Jen the DoP tries to get the shot Marshall wants and Ellie is testing her squibs on Harper as she owes him for his behaviour earlier. They all agree reluctantly to put all their phones in a box and send Kim to hide them. At this point Kim notices all the cables running up the pillars in the building and Marshall has to explain about the imminent demolition.

Meanwhile at the other tower the baddies turn up (they must be baddies, they have bullets and a gun) O’Hara (Nicholas Aaron, Bitter Harvest) has turned up with Mr Tarker’s (Richard Sandling, The Comedian’s Guide to Survival) package, that package is Phil (Phil Deguara, Pubmonkey) and another Gabi
(Daisy Aitkens, Colin) a tart that Phil had picked up but

Tarker’s brother-in-law Noodles (Ben Shafik, World War Dead: Rise of the Fallen) was too hasty much to the annoyance of Tarker. But Phil has been a naughty boy and he has to pay the price.

The price is what the crew of Dawn of the Deadly witness on Jen’s camera.

O’Hara witnesses them witnessing and says some choice words and Tarker orders O’Hara and Noodles to take the men and silence the witnesses. Now the crew have to survive on their wits and skills, and this is where Donnie shines as he shows off his Martial arts prowess and the impressive John Wick style ‘Gun Fu’. Tarker takes it seriously enough, he sends in the assassin Chilemba (Karanja

Yorke, Dragonwolf) and his associates Louis (Marcus Shakesheff, The Take Down) and Axel (Hung Dante Dong, Yamla Pagla Deewana 2) to take them out.

Now the real strong bloody violence begins as one pits bullets against wits and cunning and it is ace, right from the start you are in for a treat, as Nightshooters take to the stairs and try to escape the tower.

A must own for fans of Horror, Action and Martial Arts. 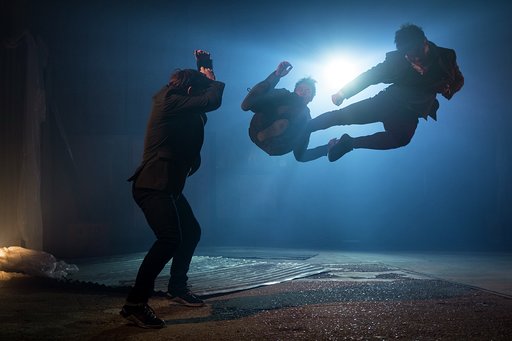 Nightshooters is available on Blu-ray and DVD