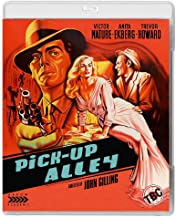 Director John Gilling (The Pirates of Blood River, The Plague of the Zombies) takes the novel by A.J. Forrest and screenwritten by John Paxton (Murder, My Sweet). A great way to get shots of great places like Athens and Rome, as our Interpol agent chases a drug lord across Europe to America.

Charles Sturgis (Victor Mature, Samson and Delilah, My Darling Clementine) is a bitter man, his sister has just been killed by the man he has been chasing in his role as a Narcotics officer for New York and Interpol.

Nobody knows what Frank McNally (Trevor Howard, Brief Encounter, The Third Man, The Cockleshell Heroes)  looks like these days as he spent some time away from America getting plastic surgery, so Sturgis has his work cut out to put a stop to his drug smuggling.

“Will you stop tryin’ to fight a one man war!”

McNally has a network of people from New York to Tangier, but his most useful is “his Doll” Gina Broger (Anita Ekberg, La Dolce Vita, War and Peace) who traffics information and other things in specially made cases that she picks up from different places across Europe.

But she has a sharper side as Salko (Alec Mango, Captain Horatio Hornblower R.N.) (McNally’s partner in crime) finds out when he tries to get forcibly friendly with Gina.

Sturgis will travel from pillar to post in his search for the elusive McNally.

If you love old passenger planes and Jazz this the film for you with intrigue thrown in.

Pick Up Alley is available on Blu-ray