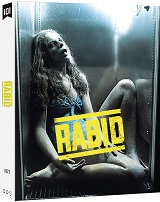 Rabid is written and directed by  David Cronenberg (The Brood, eXistenZ) and was originally released in 1977.

Set in Canada, it has all of his trademark visceral horror, with plenty of special effects. They don’t call him the King of Venereal Horror for nothing.

Rose (Marilyn Chambers – New York Nights, Breakfast in Bed) is a perfectly normal young woman. All that changes one day when she is on the back of a motorcycle with her boyfriend Hart (Frank Moore – Murder at 1600, Killjoys) and they are involved in a terrible crash. 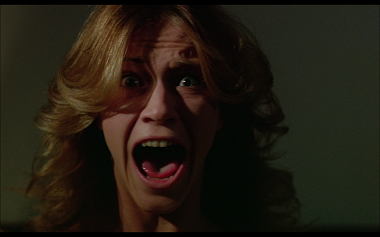 Hart is only concussed, but Rose is badly injured. As luck would have it, they are within sight of the Keloid clinic, a plastic surgery resort run by Dr. Dan Keloid (Howard Ryshpan – Babel) and business partner Murray (Joe Silver – Shivers, Deathtrap). The good Doctor wastes no time in carrying out experimental plastic surgery on Rose, creating skin grafts which can become any kind of tissue.

Rose remains in a coma after the operations and eventually Hart returns home to Montreal.  However, when Rose awakens she has developed a very interesting trait, she can only feed on human blood. To allow her to do this, she has an alarmingly phallic growth under her arm which can pierce the skin and suck out the blood. 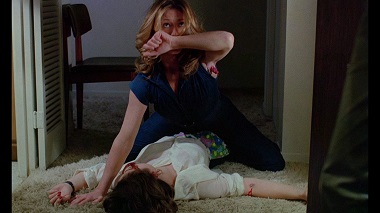 As an unfortunate side effect, anyone bitten soon contracts a rabies-like infection which causes them to attack other people and bite them, thus spreading the infection. With martial law in Montreal, a desperate race to find the source ensues.

Rabid is classic David Cronenberg. An early film, it has a relatively low budget and this is most obvious in the acting, which is minimal at best. The story itself is an interesting take on a disease/zombie theme, although how a plastic surgeon managed to create such a thing remains unclear!

It is delightfully Seventies in every single way, very much of the era and still stands up admirably today.

This release comes with a host of special features and will make an excellent addition to any horror fans collection.

“I’m gonna wait here until I know he doesn’t get sick. That way I’ll know I wasn’t the one who started all this…” 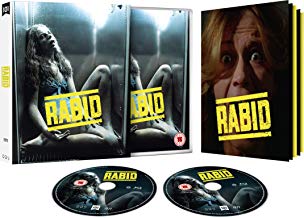 · Limited edition booklet: Includes ‘The Birth of Rabid’ by Greg Dunning and ‘Stunned. Shocked. Exhilarated: Horror in the Early Films of David Cronenberg’ by Alex Morris

· Audio commentary with William Beard, author of ‘The Artist as Monster: The Cinema of David Cronenberg’

· Young and Rabid An interview with actress Susan Roman

· The Directors: David Cronenberg a 1999 documentary on the filmmaker