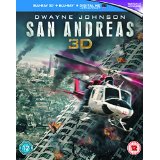 Best Disaster Movie of the Year

The hills of sunny California, a girl, Natalie (Morgan Griffin, Accidents Happen), a car, a windy road, an Earthquake and not paying attention, what could possibly go wrong? 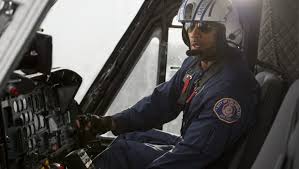 Luckily for Natalie, Ray (Dwayne Johnson, Fast and Furious 7) is in the air and headed to her location. Piloting his rescue chopper, the man comes to the rescue.

But even Ray has his troubles, he is separated from his wife Emma (Carla Gugino, Sin City) and his daughter Blake, and then he finds out that Emma is setting up home with the wealthy architect Daniel Riddick (Ioan Gruffudd, Horrible Bosses) who claims to be building the strongest, safest tower block ever (yeah right).

Meanwhile at Cal Tec, Lawrence (Paul Giamatti, John Dies at the End, Romeo and Juliet) has been trying to predict earthquakes along the San Andreas fault line and his research seems to be paying off as clusters of small quakes start to escalate.

Out at Hoover dam Lawrence and his team along with his protege Dr Kim Park (Will Yun Lee, Red Dawn) start to feel the effects of the heightening seismic activity. Things start to go wrong major time as the dam starts to fail and as everybody tries to get to safe solid ground Kim notices a young girl

cowering in a corner and goes to rescue her, (but we know that is never a good decision in a disaster movie, neither is only thinking of yourself.) Kim saves the girl at his own peril as the dam fails totally.

The earthquake spreads out to the city and this is where the fun starts as Blake is now there with Mr Riddick in his big posh office block where she meets hopeful very English interviewee Ben (Hugo Johnstone-Burt, Goddess) and his very precocious little brother Ollie (Art Parkinson, Game of Thrones). 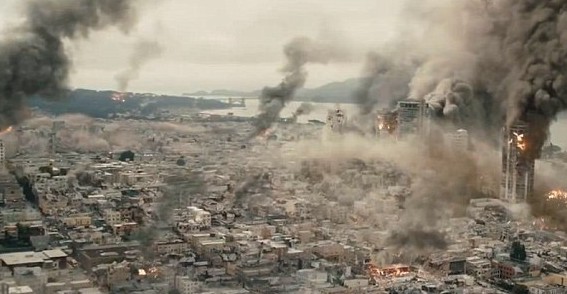 The disaster movie starts here as the building shakes and bits start to fall off,  hitting things and people. Emma is talking to Susan Riddick as the building

shakes and she tells everybody

to get to the roof as Ray heads to her rescue just as Daniel Riddick deserts Blake to her fate. But British stiff upper life will save the day.

Low on story but high on octane and effects as Ray must save the day, his ex and his daughter, amazing 3D as you dodge concrete and glass and everything else an epic earthquake can throw at you. 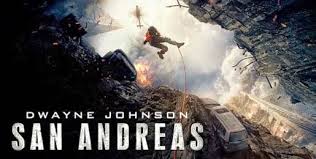