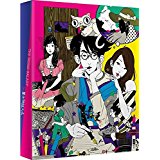 All The Anime bring us the animated version of Tomihiko Morimi‘s (Penguin Highway) Comedy-drama campus novel. The anime comes from Madhouse and is directed by Masaaki Yuasa (Ping Pong). This anime goes places that 90% of other anime doesn’t go. This award winning Art house film uses video footage as part of the animation and the colour scheme is varied and interesting, never mind the characters. This falls down for me as the characters speak so quickly that you just can not follow what is going on and having to pause the anime every time someone speaks is extremely frustrating, hence the 3 Stars. If that doesn’t bother you then this an off the wall hit.

site every night and is said to serve the best ramen in Kyoto. There is a loud slurping noise to his right and he turns to see a large chinned man devouring his food before telling the protagonist that he is the deity of matrimony, (god of marriage) (Keiji Fujiwara, Durarara!!) and that he has decided to intervene in the protagonists love life.

Our protagonist (Shintarō Asanuma, One Piece),  who has no name, for this anime is a third year university student in Kyoto, Japan and he thinks there is too much free time. So he wants to join as many clubs (‘Circles’) as possible in order to increase his social standings and find a release for his libido (Johny)

a rough drawn cowboy that is always trying to get the protagonist to get first base at least.

He (our protagonist) meets Ozu (Hiroyuki Yoshino, Baccano) a person that appears ugly to the protagonist

. He points this out and Ozu says there is no need for that. They begin to have a strange friendship even if it is Ozu that is manipulating people around the protagonist for his own amusement.

The centre for the protagonists affections is Akashi (Maaya Sakamoto. Naruto) but not exclusively as the story unfolds. He starts having a female pen-pal that he envisions to be the raven haired beauty of his dreams, as well as the heavy drinking gum masseuse Ryōko Hanuki (Yūko Kaida, A Certain Scientific Railgun).

Throw this all together and you get a melting pot of strange tales and encounters and escapades as they try to have a normal relationship.

One for the fast readers and art house fans.

“You can keep that icky stuff to yourself!” 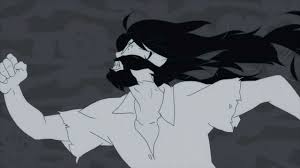