Water, a Boat and an Ambitious Plan.

Although he has more acting credits than directing ones, it his directing skills that separate John Huston from the rest, with films such as The Maltese Falcon, Key Largo, The Asphalt Jungle, The Unforgiven and Escape to Victory, you know you are in for a treat and none more so than this dramatic romance film. Now fully restored for Paramount Pictures by Romulus Films and ITV Studios. Released through (Masters of Cinema) in a limited edition Blu-ray.

German East Africa 1941, at the 1st Methodist Church Kungdo where Rev. Samuel Sayer (Robert Morley, Beau Brummell, Little Dorrit) and sister Rose (Katharine Hepburn, The Lion in Winter, On Golden Pond, Bringing Up Baby, Rooster Cogburn) preach and play to the local villagers. That is until  the villagers hear the toot toot of the steam whistle of the African Queen steaming into the riverside. The arrival of Charlie Allnut (Humphrey Bogart, The Maltese Falcon, Casablanca, To Have and Have Not, The Big Sleep) causes quite a stir in the native people as the Sayer’s look upon Charlie as a lowly commoner who has no manners when he sits at their table with a gurgling stomach.

With the pleasantries over, Charlie tells them that he won’t be able to visit them for a while due to some sort of war going on in Europe, involving all of the countries of

Europe. Samuel believes they should be alright as Charlie goes off to visit the mine where he works.

Charlie returns with similar news from the mine. The pair decide that it would be better to head down river for a while until things blow over, as the Germans are looking for the African Queen due to its cargo of explosive gelatine, hydrogen and oxygen cylinders and other sundries.

During this time, Rose thinks that they must do their duty and help the war effort by taking out the 100 ton steamer Königin Luise that rules the lake to the 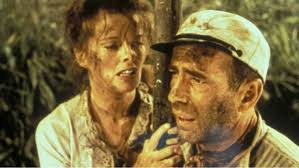 The rest is their story and what a story it is, just Bogart and Hepburn for about an hour and a half of amazing scenery, wildlife and a wild river. The best two hander ever made in my humble opinion. With all the extras (see below) this makes a cracking gift for the lover of classic film. 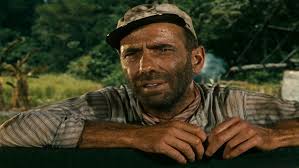 The African Queen is available on Blu-ray