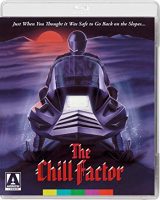 The Chill Factor was originally released in 1993. The release went to straight to VHS and was called Demon Possessed, not a very inspiring title. It was written by Julian Weaver (Trapped Alive, The Inheritor) and directed by Christopher Webster, the producer of Hellraiser and Hellraiser 2: Hellbound, but has subsequently been all but forgotten.

Happily, the good folks at Arrow Video have rescued it from obscurity and dragged it blinking into the bright sunshine of a snowy winter’s afternoon. It is now available on 1080p High Definition Blu-ray thanks to a 2K restoration from original film elements.

“The nightmare came to me before dawn. Sneaking into my mind. Disguising itself as an ordinary dream. And that’s when the first chapter of my life, my childhood, ended.”

The Chill Factor tells us the story of three couples, all heavily into snowmobiling and extremely competitive about the whole thing. They have headed North to celebrate the birthday of Chris (David Fields), who is there with his fiance Karen (Connie Snyder), her brother Tom (Aaron Kjenaas) and his fiance Jeannie (Dawn Laurrie) and their friends Ron (Jim Cagle) and Lissa (Eve Montgomery). 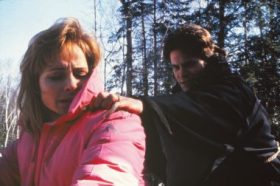 They recieve a less than warm welcome from the locals, however the bar owner Bessie (Bekki Vallin) helps to make it up with free beer and after a few too many, Chris and Tom begin to bicker about who is the fastest on a snowmobile. Ron points out that they would need a track to find that out, but as luck would have it, Bessie knows a place. An old lake bed, 30 miles away from anywhere, known as Black Friar Lake is just the ticket. It’s a strange name, local legend she says, I’ll tell you when you get back. 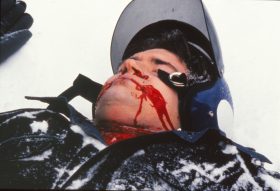 Somewhat predictably, following the race Tom comes off his snowmobile and is knocked unconscious, forcing them to seek shelter from the coming storm. What they find is Camp St. Dominic, ominously decorated with an excess of religious paraphernalia and dead animals and with the edifying motto “Keep the Beast in the Field”.

Having set a fire and got Tom comfortable and warm, they explore a little and in a box of bits and bobs, they find what appears to be a type of ouija board, known as ‘Devil’s Eye’. 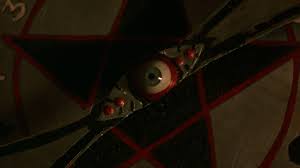 Because they aren’t already in enough trouble at this point and against the better judgement of Jeannie, they decide to give it a go, what’s the worst that could happen? Well, demonic possession of course, duh.

The Chill Factor is one of those horror films which mostly works because it is so bad. The script isn’t up to much, the acting is terrible (almost none of them acted again after this film), the soundtrack is gratingly early nineties and even with the restoration, so much of it is filmed in the dark that it remains grainy. It couldn’t be any more obviously low budget. 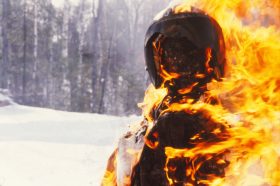 And yet in spite of all of this, it’s really enjoyable to watch. There are some really good stunts, especially an excellent burn at the end and there is plenty of fast paced snowmobile racing action, which wouldn’t have looked out of place at Lillehammer the following year.

All in all this is a must watch for horror fans and with plenty of special features, well worth adding to your retro horror collection.

“What’s your problem boy? You scared of a little black pussycat like me?”

The Chill Factor is available to buy now on Blu-ray and will be released on 15th July 2019.