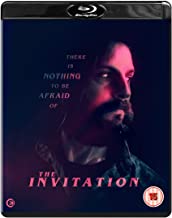 The Invitation is written by Phil Hay (R.I.P.D., Destroyer) and Matt Manfredi (Bug, Æon Flux) and directed by Karyn Kusama (Girlfight). It is presented here on Blu-ray with plenty of special features, courtesy of Second Sight Films.

“Let me ask you something. How has he been handling things? He can be self destructive.”

Will (Logan Marshall-Green – Prometheus, Upgrade) and his new girlfriend Kira (Emayatzy Corinealdi – Roots, Hand of God) have received an invitation to a dinner party hosted by his ex wife Eden (Tammy Blanchard – Into the Woods) and her new partner David (Michiel Huisman – The Age of Adaline). 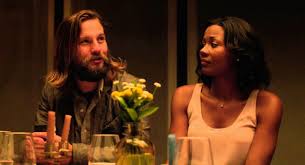 The party is to be hosted at the home they used to share together and is likely to make for an uncomfortable reunion. The evening gets off to a bad start even before they arrive, as they hit a coyote with their car and Will is forced to kill it.

All of their friends are there, and after two years it seems like a good idea to get everyone together. It is however all rather awkward, especially when Eden arrives wearing nothing but a flowing white dress and a vacant smile and preaching about how pain is optional. 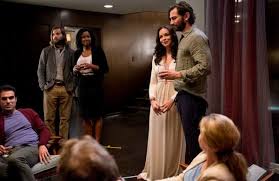 Will and Eden share a tragic past and being in his old home is very difficult for Will, as memories come flooding back, the death of their son and her subsequent suicide attempt.  He gradually becomes paranoid as the situation grows ever more tense and sinister. Despite the fact that it is a reunion for old friends, they have invited two of their new “friends” who act very strangely.

Sadie (Lindsay Burdge – Easy, A Teacher) is far too forward and Pruitt (John Carroll Lynch – Fargo, Gothika) insists on telling everyone he murdered his wife. Will strongly suspects that something is seriously wrong as it becomes more and more likely they are attempting to lure them into a cult. Can all of their friends make it through this dinner party? 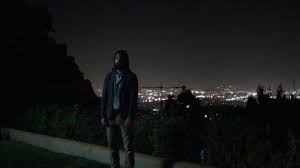 The Invitation is a very well written thriller. It’s not all about the action, this one is a slow burner, but the tension in places is almost unbearable. Although it feels obvious what is going on from about 30 minutes in, you’re never quite sure if you’re right and it features a truly shocking twist which makes for a heart stopping ending.

Despite obviously having a relatively low budget, the whole film feels well made, high production values go a long way. With really good acting and intelligent direction, this is a must own for the discerning fan of the psychological thriller. 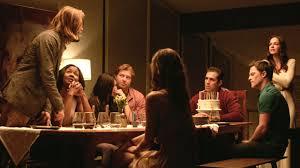 The Invitation is available to buy now on Blu-ray and DVD.