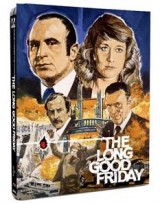 Gangster with Aspirations for London.

This brand-new restoration, which was scanned from the original camera negative, with framing and colour grading supervised by the original cinematographer Phil Méheux, (Around

the World in 80 Days) will feature a host of extras, combining the previously-released John Mackenzie commentary and making-of documentary Bloody Business with several brand new interviews.

John Mackenzie, (the Forth Protocol) brings us his 1980 vision of what is to become of the old now disused docks of London’s East End, as people have plans to bring them back to life. That person is Harold Shand (Bob Hoskins, Mona Lisa) who has been running his manor peacefully for more than ten years. He is well off and lives on a yacht

moored at the docks, with his wife Victoria (Helen Mirren, The Queen) who helps broker deals and smooths out the wrinkles in Harolds life. His right hand man Jeff (Derek Thompson, Casualty) has been having negotiations with Councillor Harris (Brian Marshall, BMX Bandits) to acquire the future plans for the redevelopment of the dockyards leading up to the 1988 London Olympic Games (yes we know they were in Seoul, South Korea).

It is Good Friday and Harold is back in the country (nice shots of the ace Concord) and he is excited as he sees the plans and explains that his backers will be arriving from the States. Harold’s muscle is Razors (P.H. Moriarty, Patriot Games) and he is well named as he has both taken scars and given them out. He has grand plans for the City and he wants his friends to have a piece of it.

Meanwhile Colin (Paul Freeman, Raiders of the Lost Ark) has been a naughty man, lifted some of the money he was delivering and is unlucky as three men are killed whilst counting the money. This puts Colin in a compromised position but he doesn’t know it. Across town Harold’s roller is sat outside the church waiting for Harold’s mother when suddenly it explodes, killing the driver.

This is not what Harold needs right now with the Americans here. Parky (Dave King, Revolution), Harold’s cop in a pocket, will keep things under wraps as Harold spins a yarn of gas leaks to keep

Charlie (Eddie Constantine, Europa) happy. But when Colin is found dead from a knife wound (a Young Pierce Brosnan, Golden Eye) it becomes obvious that someone has a beef with Harold and this is not the time, as the Americans get twitchy feet. With time running short Harold has to find out who is after him and sort it all out before his backers pull out.

This is a classic Hoskins film when he was at the height of his career, he plays the confident Harold perfectly as he pulls the deal of a lifetime off. One for the boys and a few tinnies.

Look out for the Cinema Re-Release on 19th July.