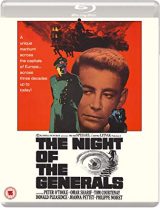 A Serial Killer in Uniform.

Eureka Classics live up to their name with this release, The Night of the Generals. Loosely based on the novel by Hans Hellmut Kirst (08/15, 08/15 Part 2) of the same name, it follows the exploits of a military investigator in the German army during WW II. Directed by Anatole Litvak (The Deep Blue Sea, The Snake Pit) and he takes us on a trip across Europe through the seedy areas of Warsaw to Paris and to post war Hamburg. This film shows the amazing talent of Peter O’Toole (Lawrence of Arabia, Caligula) and Omar Sharif (Doctor Zhivago, Monsieur Ibrahim) with a great supporting cast of Tom Courtenay (The Loneliness of the Long Distance Runner), Donald Pleasence (Halloween, The Great Escape) and Joanna Pettet (Casino Royale).

It is 1942 and Germany are trying to take Moscow, but they are holed up in frozen Warsaw. An apartment building in the middle of the city and a man goes to spend a penny or two when he hears a blood curdling scream from upstairs. He hears more movement and he hides in the toilet and through a crack in the door he manages to get a partial look at the suspected killer.

The body of a prostitute is found after an anonymous phone call and Inspector Morand (Philippe Noiret, Cinema Paradiso) attends the crime scene. What he finds is disgusting, a frenzied knife attack of one hundred stab wounds.

He calls Major Grau (Sharif) after information from the witness in the toilet, who saw the bottom half of a uniform. That could be any soldier in Warsaw but no, this one had a red stripe down the leg. Only Generals have that. Grau believes him and finds out that there were only three Generals in Warsaw  without alibi’s.

First with lipstick on his uniform General von Seidlitz-Gabler (Charles Gray, The Rocky Horror Picture Show, You Only Live Twice), next is a General that spends a lot of his time burning letters when no one is looking, General Kahlenberge (Pleasence) and the straight cut Hitler fan General Tanz (O’Toole).

“But murder is the occupation of Generals.”

To the annoyance of the three Generals, Major Grau is tenacious and won’t give up on his quarry and so finds himself promoted to a position in Paris, out of the Generals way.

But two years later, all three Generals are in Paris and a similiar murder takes place. Now Grau has something to get his teeth into. All the while a hero Corporal Hartmann (Courtenay) dates a Generals daughter Ulrike (Pettet). Just at the same time high ranking officers are plotting the demise of Hitler.

“What are the orders, Sir

In case of resistance?

In case of resistance,

Murder, Mystery at its best.

The Night of the Generals is available on Blu-ray.