Humility in the Face of Adversity.

From the master of adaptations Henry King, (Lloyds of London, A Yank in the R.A.F., Twelve O’Clock High, David and Bathsheba) a man with a glittering career during the golden age of Hollywood, The Song of Bernadette (Franz Werfel (novel), Embezzled Heaven) is the biography of a young Bernadette Soubirous of Lourdes France and the events in the year 1858 and beyond. With all the extras and the two versions of the film (see below) this is a must for your collection whatever you believe in. 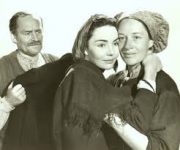 François Soubirous (Roman Bohnen, Joan of Arc, 52nd Street) is a down on his luck miller, he used to be the best but times have changed. He and his wife Louise Soubirous (Anne Revere, National Velvet, Gentleman’s Agreement) live in a disused jail not fit for prisoners, so they live there with Marie (Ermadean Walters), Bernadette (Jennifer Jones, Since You Went Away,  Beat the Devil, We Were Strangers) and their two young boys Justin Soubirous (Nino Pipitone), Jean Soubirous (Merrill Rodin, The Strange Death of Adolf Hitler).

François has to get up very early to try and find a days work, he tries the bakers but even he doesn’t have enough work to employ anybody else, but he says why not try the hospital. He is in luck (not) as he has to transport diseased waste to the local out of town dump and cave at Massabielle and burn it all.

sisters attend, fourteen-year-old Bernadette is shamed in front of the class by Sister Vauzous, the teacher (Gladys Cooper, My Fair Lady, Rebecca), for not having learned her catechism well. The Dean Abbé Dominique Peyramale (Charles Bickford, The Unforgiven, Reap the Wild Wind) shows up and gives the girls a religious postcard, but the sister takes Bernadette’s off her as it would not fair to the girls that have done their studies.

“Are you pert, indifferent or only stupid?”

“I’m stupid, Sister. I have a poor head for study.” 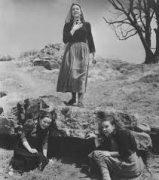 As Marie points out, her sister suffers from asthma and she is often bed ridden or has fallen ill, which is a problem for their family. Even with their father earning a meagre wage they still fall short on the essentials like fire wood, but Marie and her friend Jeanne (Mary Anderson, Gone with the Wind) say they know where they can get firewood and Bernadette wants to go along. Her mother protests but she goes after them even though she has trouble breathing. They pass the cave at Massabielle and head for the river where Marie and Jeanne start taking off their shoes and socks ready to wade across the river. When Bernadette goes to do the same she is chastised by the others that she will catch a cold from the freezing waters. She is told to wait while they cross and collect wood from the private woods on the other side.

e cave and settles herself down, still determined to follow her sister, she starts to take off her shoes when a strange wind blows up and the sky goes strangely dark. She looks up and sees a bright light in the niche of the cave and the apparition of a woman in white (Linda Darnell, The Mark of Zorro) with a pearl rosary. Bernadette is transfixed and kneels before her, listening to what this woman has to say.

The girls have done a great job collecting wood and need Bernadette to help carry it home, but they cannot see her. They call out but no reply, they repeat

and Bernadette is brought out of her reverie. She whips off her shoes and socks, hitches up her skirt and runs through the water, much to her sisters surprise especially as she says the water is warm as a summers day, but it is February the 11th. She tells her sister about her experience with the woman and asks them not to say anything about it, but sisters being sisters she soon tells her mother and father who do not believe Bernadette. They think she is trying to get some attention, but the news soon spreads throughout the town.

This annoys the local authorities such as mayor Lacade  (Aubrey Mather, Heaven Can Wait), Prosecutor Vital Dutour (Vincent Price, Laura, The Comedy Of Terrors, The Pit and the Pendulum, Theatre Of Blood), Dr. Dozous (Lee J. Cobb, 12 Angry Men, The Exorcist, Sirocco) and the local policeman (Hooper Atchley, The Three Musketeers) who is stuck in the middle of it all.

At two and half hours long this may feel long for a 1943 film but how can you fit in so many miracles in an hour and a half? With so much against her Bernadette remains resolute and humble when all those higher up try to ridicule her, but what does the Empress believe?

The Song of Bernadette is a master piece of cinematography and should definitely be in your collection whatever you believe in. 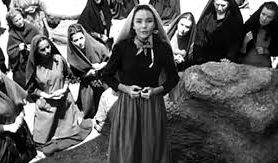 The Song of Bernadette is available on Blu-ray