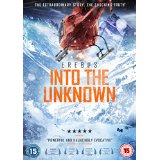 On the 28th of November 1979 the Dc-10 was flying over the ice sheets of the Antarctic, we hear the co-pilot asking his superior where is Mount Erebus, the pilot to his left says about 25 miles away, but then we hear the planes computer going “Pull Up, Pull Up”. That was the last words of flight 901 as it smashed into Mount Erebus.

Suddenly over in Air New Zealand’s offices they go into a frenzy, as they don’t know what happened to their plane and the worlds media also want to know what has caused the 4th largest crash in history and what has happened to the 257 souls on board.

This falls to 11 ordinary policemen of New Zealand’s finest.

This is where this documentary shows its credibility as we meet the guys that had to train and travel to the South of the planet.

We also meet Stuart Leighton, Greg Gilpin and Mark Penn. These policemen had

never been on the snow or at high altitude, Mount Erebus tops out at 3,794m and it is a different world up there. When they arrive by helicopter the visibility is so bad they have to take a leap of faith out of the helicopter. What greets them is everybody’s worst nightmare,

sights, sounds and smells that will never leave you.

With bodies frozen solid, dismembered, burnt and partially eaten by the birds that constantly circle overhead in the permanent sunshine of the fast approaching Antarctic summer. In the inferno that followed the crash, bodies 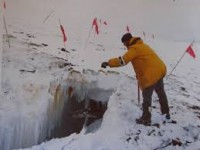 melted into the snow a 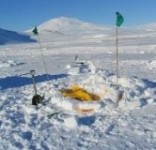 nd the weight of the superheated engines sunk into the deep snow taking bodies with them into crevasses as well as the natural ones. To identify the difference they use flags, green for bodies and red for the crevasses.

These eleven guys go through hell trying to recover all the bodies in the short time they have before the sea ice starts to breakup preventing the recovery planes landing. Bearing in mind that all these people only have one set of clothing and one pair of gloves each, they all develop a unique aroma as they eat, sleep and recover bodies in this attire.

Nobody can prepare for what they would find in that frozen hell, even the body bags had to to made for the shapes of the frozen people found. But despite all their adversity they manage to recover the bodies of 214 of the passengers, returning them to their families, a record, due to Bob Mitchell’s protocols.

But what caused this crash? Pilot error is bandied about in the worlds press and Air New Zealand are happy to go along with that at the inquest. But a discrepancy is seen by one of the recovery team, this is the twist in the tragic tale of flight 901.

With the acting talents of:

They bring this documentary up to a realistic portrayal of the accounts of those that were there. Along with the news reports that were on the TV at the time.

These great men were left out in the cold for so long once they returned, this is their story and of those who were flying flight 901.

Available to Order on DVD and On Demand Now.