RUBBLE KINGS
The incredible true story of the real-life ‘Warriors’, New York’s tough street culture and the birth of Hip-Hop 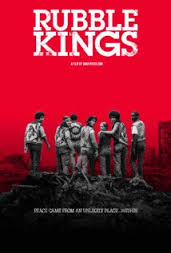 Produced by Jim Carrey, directed by Shan Nicholson and narrated by John Leguizamo, RUBBLE KINGS charts the untold story of the real-life ‘Warriors’, the New York street gangs of the 1960s-70s, in the words of those who lived it; connecting the dots between New York’s tough street culture of the late-60s and the birth of hip-hop.

Featuring stunning, never-before-seen archive footage and unprecedented access to the leaders and key members of the most notorious gangs of 1960-70s New York, as well as key innovators from the very earliest days of hip-hop such as Afrika Bambaataa (an ex-Black Spade warlord), Kool Herc, and DJ Red Alert.

From 1968 to 1975, gangs ruled New York City. Beyond the idealistic hopes of the civil rights movement lay an unfocused rage. Neither law enforcement nor social agency could end the escalating bloodshed. Peace came only through the most unlikely and courageous of events that would change the world for generations to come by giving birth to hip-hop culture.

RUBBLE KINGS chronicles life during this era of gang rule, tells the story of how a few extraordinary, forgotten people did the impossible, and how their actions impacted New York City and the world over.

Shan Nicholson is an award-winning filmmaker, DJ and music producer from New York with a passion for pop-cultural storytelling.