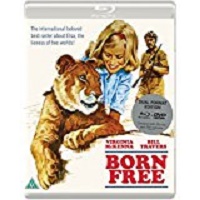 Wildlife and the Start of A Legend.

Once again Eureka brings us a classic, Born Free (1966). The true story based on Joy Adamson’s best selling book of the same name. Now brought up to HD quality, so that you can really enjoy the marvellous vistas of the African plains and with a classic soundtrack from John Barry (You Only Live Twice, Diamonds are Forever, The Man With The Golden Gun) you will be transported to the hot dry grassland of Kenya.

Early morning chores sees a group of women doing the washing in the fast flowing waters of a river. Unbeknown to them, there is a male lion in the vicinity and it is out for blood, human blood and as the women depart the numbers drop to just one and she is too busy washing to see him pounce.

It is senior Game Warden George Adamson’s  (Bill Travers, Ring of Bright Water) job to deal with animals which endanger human life and crops. He and his team track the lion up into the hills, when they spot him he charges and George has to shoot him. As they study the corpse, the lions mate attacks and once again he has to shoot it.

When George gets back he has a surprise for his wife Joy (Virginia McKenna, A Town Like Alice), the three cubs the lioness had been protecting, which George and his team didn’t know about at the time.

They both agree that they should rear the cubs,  but first they have to get them to feed. However the cubs refuse to take any milk and the Adamson’s try many different formulas, but the cubs still refuse to feed, until George comes up with formula 17 and suddenly they have three growing

boisterous cubs. Joy immediately takes to the runt of the litter and names her Elsa after a girl she knew at school that was small but strong.

Now they have the trouble of cub proofing their house and compound and when their boss John Kendall (Geoffrey Keen, The Spy Who Loved Me) worries that they might inherit their parents

trait of being a human eater, he suggests sending them to the zoo in Rotterdam. The Adamson’s have already been in contact with the zoo and are preparing the cubs for the journey.

They take the cubs to Nairobi for transport and Joy goes off as she doesn’t want to see them go and when she returns she is surprised when Elsa comes through the rear window.

Now the fun begins as they decide to rear Elsa to go back to the wild.

This is a story that started a legacy that still runs today so sit back and enjoy this endearing tale of human and animal interaction. 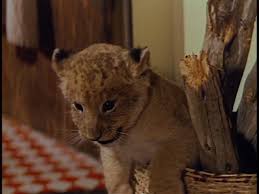