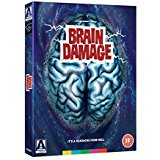 Brain Damage was originally released in 1988 and is written and directed by the supremely bonkers Frank Henenlotter (Basket Case, Frankenhooker). It is, quite magnificently, one of his weirder offerings and it certainly isn’t for the faint hearted.

“Just put me on the back of your neck and everything will be fine.” 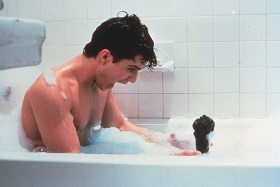 Brian (Rick Hearst – The Bold and the Beautiful, General Hospital) is a perfectly normal young man, sharing an apartment with his brother Mike (Gordon MacDonald – The Thin Red Line, The Brave One) and looking forward to moving in with his girlfriend Barbara (Jennifer Lowry). 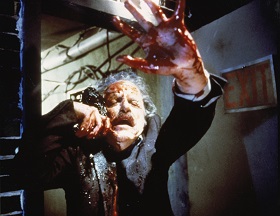 They have been harbouring an entity known as Aylmer (John Zacherley – Niagaravation), a nasty little brain parasite who has decided he wants a change of scenery.

He makes a hole in the back of Brian’s neck, through which he can inject a highly addictive blue juice, which causes hallucinations and euphoria, much like taking drugs. In return for this, Aylmer expects to be fed human brains, a procedure which happily Brian is unable to remember afterwards, although the cost may turn out to be too high. 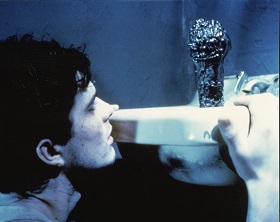 There is no doubt that Brain Damage is one of the craziest of a pretty strange bunch of eighties horror films. There is a mind boggling amount of gore and although for the most part the acting is rubbish it doesn’t really detract from the enjoyment. Although it is a comedy, it also makes some pretty strong statements about drug use and the tripping scenes are very well done, as are the depictions of the consequences.

There are plenty of scenes which are in extremely bad taste (most notably the blow job sequence) and Aylmer himself is hilarious, a horror bad guy for the ages!

Packed with special features, this release is a must own for the committed horror collector.

“This is the start of your new life Brian. A life without worry or pain or loneliness. A life filled instead with colours and music and euphoria.”