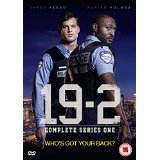 19-2 is a slow paced cop drama that relies heavily on the characters of the show. This is an adaptation from a French series of the same name but differs slightly.

This isn’t Starsky and Hutch, it isn’t Hill Street Blues, it isn’t even Thin Blue Line. It is 19-2.

Officer Nick Barron (Adrian Holmes, Elysium) enjoys his job and being with his partner Jean-Pierre Harvey (Victor Cornfoot, White House Down) of car 19-2 in the metropolis of Montreal, Canada. But when 19-2 turn up at a factory at night Nick makes the call to go in without backup. That turns out to be the wrong call, as when searching Nick is shot in his protective vest. Harvey returns fire but is critically wounded with a shot to the head, Nick is unhurt and fires a volley killing the assailant.

Three months later Nick is back to work and is hoping to hit the streets again as a solo driver. But that’s not how it goes. Newly transferred from Morin-Heights Quebec, Ben Chartier (Jared Keeso, Elysium) is paired up with Nick which does not sit well with either of them. This is the main thread of this series as they have to go through their daily routine whilst Montreal tries its hardest to spoil it.

Everybody within the police department has some sort of baggage that they have to sort out, Nick trying to get back with his wife Detective Isabelle Latendresse (Maxim Roy, Hidden Agenda), who soon has her detective sights set on Ben.

Nick is a bit of a force unto himself at the best of times and this is of keen interest to District Commander Marcel Gendron (Bruce Ramsay, Behind the Candelabra), head of the station who thinks Nick should still be on sick leave and keeps a close eye on his progress.

Covering subjects such as alcoholism, domestic abuse, trust, drug abuse and the day to day work of being parents and partners the day to day life of a cop in the big city.