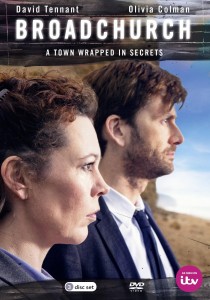 This gripping 8 part thriller is set in the small seaside resort of Broadchurch, where the discovery of the body of 11 year old Danny Latimer on the beach throws a once close-knit community into chaos.

Cue the arrival of DI Alec Hardy (David Tennant – Dr.Who, Twenty Twelve), brought in from outside the town, amid a media storm over a failed investigation. His second in command DS Ellie Miller (Olivia Colman – The Iron Lady, I Give It A Year) is less than pleased to discover that she has been passed over for promotion and forced to work on such a sensitive case with someone who doesn’t even know any of the locals.

As the investigation continues, tensions mount as the eye of suspicion begins to fall on every member of this little community, neighbours and friends begin to turn on one another, and this once insular community is pulled apart by the media attention.

From start to finish, the tension is built beautifully and maintained throughout by a haunting score written for the series by Olafur Arnalds (Another Happy Day). The acting performances are incredible, every single member of the cast puts in an immaculate performance and the end result is as emotional as it is thrilling.

There are no shortage of familiar faces in Broadchurch, the cast includes Jodie Whittaker (Attack The Block, Marchlands), Andrew Buchan (Garrow’s Law, Cranford), Arthur Darvill (Dr. Who), as well as Pauline Quirk and Will Mellor.

Although not one for the faint hearted, Broadchurch is a brilliant, compelling watch, that will have you on the edge of your seat right to the end and is well worth adding to your DVD collection.

Broadchurch is available to buy on DVD from March 20th 2013