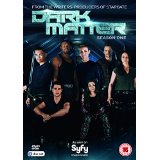 From the pens of the dynamic duo who brought us such great Sci-Fi as Stargate SG-1, Stargate Atlantis and SGU Stargate Universe Joseph Malzlozi and Paul Mullie, they bring us a 13 part series that stands out as a riveting show.

Deep space, a derelict spaceship drifts through the darkness. Inside is full of noise and light, sirens blare and beacons flash as the ship’s life support starts failing. Other things start happening on board, stasis pods start opening and reviving their inhabitants.

They seem shocked to find themselves where they are but the situation they are in takes precedence and they start running around consoles trying to sort out the problem. There are six people on the spaceship, they don’t know where they are or who they are. So they decide to name themselves after the order they woke up. 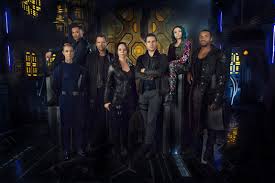 The crew is One (Marc Bendavid, Murdoch Mysteries), Two (Melissa O’Neil, Broken Hearts), Three (Anthony Lemke, White House Down), Four (Alex Mallari Jr, Pay the Ghost), Five (Jodelle Ferland, The Cabin in the Woods), Six (Roger R. Cross, Continuum) and the android (Zoie Palmer, Cold Bloodied) that tried to kill them until they managed to deactivate it and wipe it clean of memories.

They have no memory of who they are but they all have the skills they had before they were put in stasis. Four has amazing sword skills and Six can pilot the shuttle. Searching the ship they find  a huge cache of guns, and that their ship has a preprogrammed destination, a mining planet. Are they delivering them or are they supposed to use them? After much deliberation, they go for the friendly option.

But after doing the right thing they find out that 90% of the crew are murderers and thieves and they were delivery people, but sent there to remove the miners permanently. Why is Five having other people’s dreams and what is behind the unbreachable large door that Three discovers in the bowels of the ship? Watch the characters grow as the truths are revealed, there is much to be unveiled on board the Raza.

With season 2 already commissioned we at RRR are looking forward to it.