1 star for this bizarre attempt at a horror film. 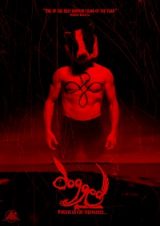 Dogged is based on a story written by Charlotte and Richard Rowntree with screenplay by Matthew Davies. It is directed by Richard Rowntree and is his debut feature length film, which certainly shows. The whole thing cries out lack of experience.

“This island is your family. What more could you need?”

Dogged tells us the story of Sam (Sam Saunders), a young man who has returned from university to stay with his parents on the remote Farthing island where he was born and raised. 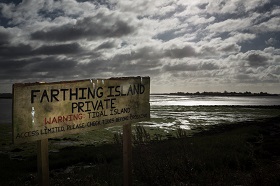 He is there to attend the funeral of local girl Megan, who has unexpectedly fallen from the cliff tops. His uneasy, if not downright hostile relationship with his father (Philip Ridout – Precognition) is immediately evident despite his mother’s (Jo Southwell – The Minnitts of Anabeg) best attempts to smooth things over.

He catches up with former girlfriend Rachel (Aiysha Jebali – Call of Babylon) much to the disgust of her father (Toby Wynne-Davies – Wereminds), the local priest and her extremely creepy brother Daniel. With the local doctor (Tony Manders – The Antwerp Dolls) acting strangely and suspicious about Megan’s death, Sam begins digging but he may well uncover far more than he wanted to. 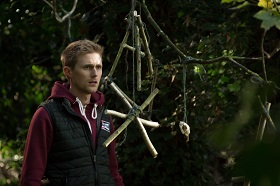 Dogged is a very odd film. Even though virtually nothing happens, it is obvious right from the start that it is supposed to be a horror film, as the opening credits are about as subtle as a sock full of fifty pences to the face. After that however we move onto boring landscape shots with ridiculous camera angles, general bickering and a really strange attempt to make cream teas sinister (note to self, you can’t). 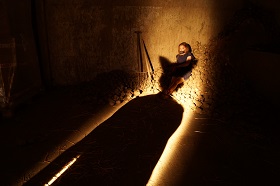 I’d like to say it’s low budget, but it appears they had a huge budget and spent it all on making the homes on the island look like an episode of Escape to the Country. Certainly none of the budget went on costume, they could only afford the heads of the Furry costumes, making it look like the weirdest convention ever.  One cannot overlook the sheer genius of the casting director however. Finding and assembling so many people who can’t act in one place is a talent in itself.

If you can believe that the population of a tiny island could actually not know everything there is to know about each other’s business, then you might like this, otherwise probably not.

“There’s no need to get anyone else involved. We islanders handle our own problems.”

Dogged is available to buy now on DVD.