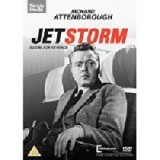 The genius that brought us such classic films such as Hell Drivers, Sea Fury and the all time classic Zulu and the original scenario and concept of Zulu Dawn, C. Raker Endfield aka Cy Endfield brings us a story of revenge, and it is best served in the cold air at 35,000 feet. Taking from the original story by Sigmund Miller, Endfield writes the screenplay and brings us this awesome piece of claustrophobic drama.

Richard Attenborough, Jurassic Park) is a very sad deranged man after his daughter was killed in a hit and run accident, and Ernest believes it was committed by James Brock (George Rose, A Night to Remember). Ernest, a former scientist, has been obsessed with finding the culprit and has turned to excessive means by way of retribution.

Following Brock and his wife onto a transatlantic flight from London to New York, Tilley wants to make the greatest sacrifice, killing himself and the man that killed his beloved daughter along with the crew and the 32 other passengers as well as an eight year old boy.

Tilley is adamant that he is not going to reveal the location of the explosive device. This is when Capt. Bardow  (Stanley Baker, Zulu, Hell Drivers) kicks into gear, trying to find the device by searching the whole plane, but some want to use strong arm tactics while others want to reason with him.

How will it all pan out as they fly to their destiny, some believe in what will come will come, while others believe they are masters of their own destiny.

The tension is great as plots are hatched and others lose their minds, a great film that deserves to be in your classic film collection. 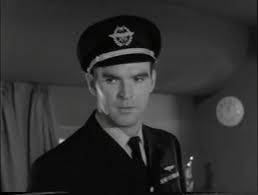