Polterheist is a highly original British horror comedy caper, written and directed by Dave Gilbank, his feature debut, and co-written by Gemma Head who also stars and Paul Renhard.

Following its success on the festival circuit, Polterheist has an exclusive early DVD edition from Halloween onwards and is available to buy now.

Tariq (Sid Akbar Ali – Strings, Banana) and his pal Boxy (Jamie Cymbal – Bodies, Seizure) are gangsters, specifically drug money collectors. Their jobs are suddenly made far more difficult when they discover that their boss Frank  has doubled crossed them, taking the money they were to collect and leaving them to take the fall for him. 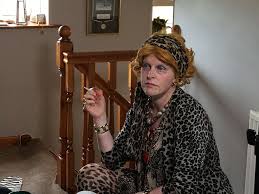 They track him down and decide to prevail upon him to give them the whereabouts of the cash. However, when Boxy gets carried away and accidentally kills him, this ceases to be an option. Uday (Pushpinder Chani – Emmerdale, The Boy With The Topknot) the drug dealer they were collecting for is understandably displeased and gives them 72 hours to come up with the cash.

Desperate to find the money, they enlist the help of local self proclaimed psychic Alice (Jo Mousley – Monroe) who has recently helped Detective Wilkes (Polly Lister – London Unplugged) locate the bodies of missing children. This seems like a good plan, but they will soon find they have bitten off far more than they can chew. 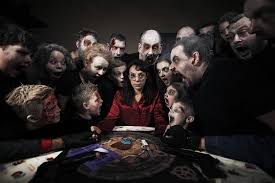 Polterheist is a very funny film, starring lots and lots of newcomers who produce some pretty impressive acting in places. It is most certainly not for the faint-hearted on any level, it is gory, explicit, racist and generally offensive and the sheer quantity of swearing is mind boggling.

If you’re not easily offended and enjoy a good, independent British film then it is most certainly worth giving this one a go. 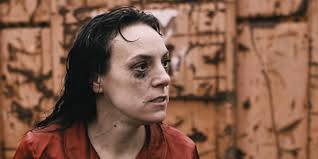 Polterheist is available to buy now on DVD.