This is a very entertaining film and I have given it 3.5 stars. 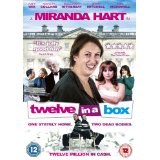 12 In A Box is a classic British farce in every sense of the word. It perfectly captures the spirit of the Carry On film era, in a way that the new Carry On films completely failed to do.

The film tells the story of twelve individuals of varying ages and social backgrounds, linked only by the fact that they attended the same high school. Brought together to attend a reunion, upon arrival they discover that they will each receive a check for one million pounds, provided they can spend ninety six hours in the mansion house together, with no-one leaving the grounds at any point. Let the fun commence!

12 In A Box contains a delightful amount of running about half naked, yelling, sexual intrigue, slap stick and generally all the things that make a British comedy fun. There are a few twists and turns and I did laugh out loud quite a few times. In some ways the parts which are predictable are funnier just because you know what’s coming.

The film was written and directed by John McKenzie (Vol-au-Vent) and stars a list of largely unknown but very accomplished British actors, most notably of course Miranda Hart (Miranda, Call The Midwife) who is much better known now than when the film was originally made in 2007.

12 In A Box is never going to go down as a classic, but it is a jolly good romp that makes for a great night in. Thoroughly recommended.