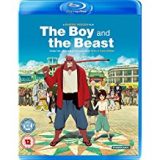 The Boy and the Beast is written and directed by Mamoru Hosoda (Wolf Children, The Girl Who Leapt Through Time) and produced by Studio Chizu. 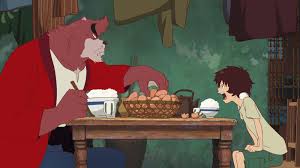 Our story opens in the realm of the beasts, Jūtengai, where the Lord (Steve Powell – Space Dandy) has decided the time has come to re-incarnate as a deity. He chooses two potential successors, the powerful and popular Iôzen (Sean Hennigan – Tokyo Ghoul) and the strong but brutish and lazy Kumatetsu (John Swasey – Attack on Titan: Junior High).

It is recommended to Kumatetsu that he should find himself an apprentice, so he takes his friend Tatara (Ian Sinclair – Rage of Bahamut: Genesis, Brothers Conflict) and together they head off to the human world.

It is here that they first encounter Ren (Luci Christian – Samurai Bride), a troubled young boy living on the streets of Shibuya, having run away from his family. Kumatetsu proposes he become his apprentice, but he isn’t interested. However, when he follows them back to the beast realm out of curiosity he finds himself unable to return to the human world and has little choice but to stay. 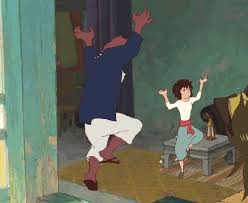 Taking a human for an apprentice is frowned upon by the beasts, as they believe that humans carry a darkness within them that will always overcome them and make them dangerous, but Kumatetsu is quite adamant and so Ren moves in with him.

Kumatetsu renames him Kyuta and they embark upon a rocky master and pupil relationship. They don’t get on and Kumatetsu is a terrible teacher, but between them they must find a way to make it work, with the help of Tatara and Hyakushubo (Alex Organ – No-Rin, Appleseed XIII), so that Kumatetsu can win the contest and become the Lord. 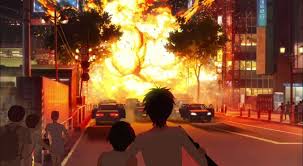 The Boy and the Beast is a really excellent film with a well thought out storyline which keeps you engrossed from start to finish. I was expecting a rather childish film, however this is anything but, with a mature and beautifully realised concept. It is quite emotional in places but also has plenty of laugh out loud comedy moments.

You can clearly see that it is the work of Mamoru Hosoda, the animation is fantastic and very similar in style to The Wolf Children.

It is a heartwarming coming of age tale which leaves you quite satisfied, a great way to spend an afternoon and well worth adding to your collection.

“What do I care if he’s a human or a toilet brush? An apprentice is an apprentice, get it?”

The Boy and the Beast is available to buy now on DVD and Blu-ray.