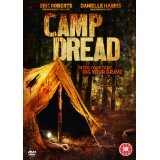 Camp Dread is written and directed by Harrison Smith (The Fields, 6 Degrees of Hell) and tells the story of Dead.tv, a reality TV show, the auditions for which form the opening credits of the film.

Julian Barrett (Eric Roberts – The Dark Knight, The Expendables) is a washed up horror film writer and director, who had a series of hit films in the 1980’s called Summer Camp. 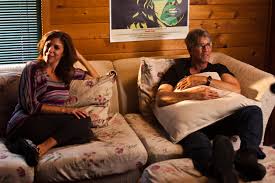 With his career all but over, Julian comes up with a cunning plan, to re-unite the team from the original franchise to produce a reality TV show made on the original set of the Summer Camp films. Rachel Steele (Felissa Rose – Sleepaway Camp, Satan’s Playground), the killer from the original films, now a trained shrink and John Hill (Brian Gallagher – Miss December, Who Is Jose Luck?) turn up in readiness to meet the contestants. Why on earth they would agree to do that I have no idea, as they clearly all hate each other, but hey, lets go along with it for now. 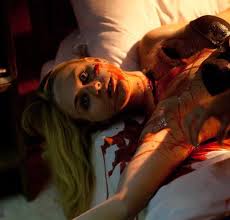 The lucky group who have been selected for the opportunity to win one million dollars are the sorriest bunch you could hope to meet. They are all basically hand picked twenty somethings who had the choice between jail, rehab or the TV show.

Not surprisingly, they are as sceptical about this concept as I was about the idea of an actress turned councillor,  however, in their case greed takes over and the  fun begins. They are initially told that the last one to “survive” will win, as in they will be shot with a paint ball, or tapped on the shoulder and asked to leave, but, shock horror, soon people actually start to die! 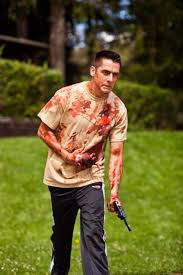 There are some good performances from the contestants, notably Montana Marks (Silver Linings Playbook) as Katie, Nicole Cinaglia (You’ll Know My Name) as Adrienne and Joe Raffa (6 Degrees Of Hell) as Novak. Danielle Harris also puts in a good performance as Sheriff Donlyn.

My main problem with this film is that it’s just so implausible. I can’t believe anyone could be as gullible as these idiots. Eye candy wise, for the male viewer there is plenty of nudity and the occasional random lesbianism, which I suppose could add to it’s appeal.

A lot of the deaths are innovative and quite good fun to watch, in fact since this is a reality show I am seriously toying with the idea of contacting the producers of Big Brother and suggesting that maybe they could provide some acid, machetes and barbed wire for the next series. Could be a hit.

“You know, you really shoulda watched more horror films, then you woulda seen that coming”

Camp Dread is available to buy now on DVD.