4 stars for this cheeky and funny romantic comedy. 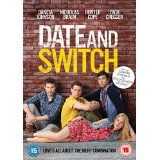 Date and Switch is written by Alan Yang (Parks and Recreation) and directed by Chris Nelson (Ass Backwards).

Matty (Hunter Cope – April Apocalypse) and Michael (Nicholas Braun – The Perks Of Being A Wallflower) are typical teenagers. They have been best friends for as long as either of them can remember, raising hell and causing mayhem and generally having a great time.

But as prom night approaches and they begin to make plans for their future, i.e. losing their virginity before the prom, Matty makes an announcement to Michael that will change everything, he is gay.

He asks that he keep it to himself, but they agree to stick with their plan to get each other laid, however complicated it may get. However, neither of them have any idea how to make that happen, they have no knowledge of the gay scene or indeed how to manage relationships in general.

As you might imagine there are a lot of issues to be dealt with along the way, most notably ex girlfriends. Em (Dakota Johnson – Fifty Shades Of Grey, Goats), is Matty’s ex and is trying to help him sort through his feelings in preparation for coming out, but at the same time may or may not have feelings for Michael. Michael himself is regretting splitting up with his ex, Ava (Sarah Hyland – Scary Movie 5, Vampire Academy), even though she is turning out not to be the angel he thought that she was.

A chance encounter with Greg (Zach Cregger – The Civil War On Drugs) outside a gay bar will change everything and test their friendship to it’s limits, but will they find a way to work it out? 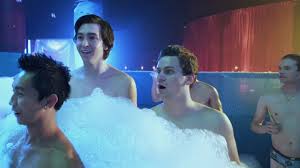 There are some great scenes in the gay bar, the foam room is nothing short of magnificent and it is a very accurate representation of the awkwardness of straight people in a gay environment, but a genuine attempt by a friend to help out.

A great new take on a buddy movie/ coming of age film, this is well worth a watch, a thoroughly enjoyable film and highly recommended.

“This is an American tradition. Having sex by prom is a story told over and over again by our greatest writers. Huck Finn, Moby Dick, Ulysses, The Iliad, they’re all about having sex by prom”.