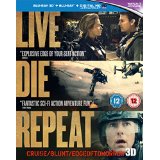 Edge of Tomorrow is based on the illustrated novel All You Need Is Kill by Hiroshi Sakurazaka, and is directed by Doug Liman (The Bourne Trilogy).

Set in the near future, Edge of Tomorrow takes us to an Earth which has been attacked by an alien race, hell bent on destruction. 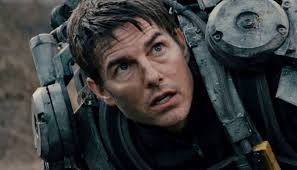 This is a Groundhog Day style story, centered around our hero Major William Cage (Tom Cruise – Jerry Maguire, Oblivion), a desk officer who has never seen a day of action in his life. After several desperate pleas to General Brigham (Brendan Gleeson – Troy, In Bruges) to avoid being sent to the front line, he awakens to find himself on a pile of duffle bags outside the recruitment area, awaiting shipment to the beach where the big assault will occur.

His superior officer, Master Sergeant Farell (Bill Paxton – Aliens, Apollo 13) appears to take him to meet the team he will be dropped in with, and his nightmare begins. 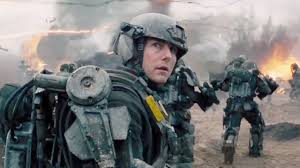 With no experience of the equipment he has been given, he doesn’t even know how to take the safety off his gun, he is thrust into the heart of the battle, only to see his team mates slaughtered in front of his eyes and then, after taking out one of the enemy, to be killed himself.

He awakens to find himself on a pile of duffle bags outside the recruitment area, awaiting shipment to the beach where the big assault will occur.

His superior officer, Master Sergeant Farell appears to take him to meet the team he will be dropped in with, and his nightmare begins. 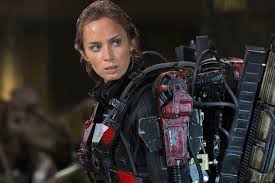 He soon realizes that he is in fact caught in some kind of bizarre time loop, which is enabling him to reset the day over and over again. With each reset, his proficiency with his weapons increases and he begins to live a little longer each time and build a picture of what is happening.

When he meets up with The Angel Of Verdun, Rita Vratski (Emily Blunt – The Adjustment Bureau, Looper), he discovers that she too briefly held this power, and with the aid of her training and Dr. Carter (Noah Taylor – Lara Croft; Tomb Raider, Submarine), who understands the alien physiology, they hope to use his new found abilities to stop the offensive before it is too late. 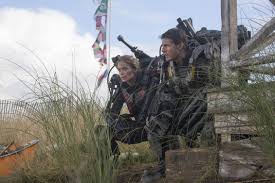 This is a very exciting film to watch, the 3D is excellent, both depth of field and the occasional “into the living room and make you jump off the sofa” moment too. The story, although based on an existing concept, is well written and well explained. The aliens themselves are really cool and you get to see plenty of them, which is always nice.

As you would expect the acting is good and there are plenty of eye boggling special effects to watch, as well as the disc being packed with lots of behind the scenes goodies in a series of featurettes.

All in all this is a great watch and comes highly recommended for any Sci-fi enthusiast.

“Come and find me when you wake up.” 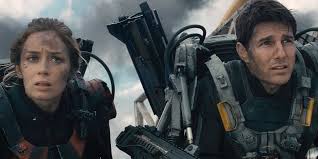