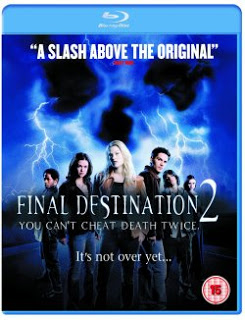 Final Destination 2 is a highly entertaining film and as such I have given it 4 stars.

First I should explain the premise of the film for those among you who have not yet seen Final Destination. In the first film of the series, a teenager has a premonition that there is going to be a plane crash and prevents himself and some of his friends from boarding. The premonition proves true, and they are saved, but death can not be defeated and comes for the teenagers one by one.

The premise of the the second film is very similar to the first, however this time it involves a premonition regarding a pile up on the free-way.

Although I am not necessarily a fan of the teen horror genre, Final Destination 2 is very well written and in my opinion it is a better thought out story than the first film. The deaths certainly become more elaborate as the franchise progresses. The film features some excellent performances from its young stars, A.J. Cook (The Virgin Suicides, Out Cold), Ali Larter (Final Destination, Heroes), Michael Landes (The New Adventures of Superman) and the very scary Tony Todd (Candyman, Platoon).

I own all of these films on DVD and I must say that there is a noticeable difference in the picture with the Blu-Ray version, the gore and violence are all the more graphic (great if you like that kind of thing!).

Both the DVD and Blu-Ray versions of this film boast a large quantity of pretty good special features including; Film Maker Commentary, The Terror Gauge, Cheating Death:Beyond and Back, 2 Music Videos, Deleted scenes and Theatrical Trailer.

All in all this is an excellent watch for the over fifteen market and I would recommend an evening in front of the Final Destination series to anyone with a penchant for entertaining horror stories with plenty of blood and guts thrown in for good measure.

Final Destination 2 is available to buy now on DVD