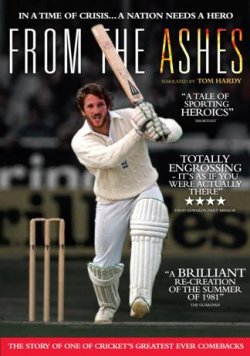 From the Ashes is a quite magnificent documentary film, as the name suggests about cricket, and in particular the very memorable 1981 Ashes Series. Whether you were there and remember watching it the first time around, or whether you are like me and come to this for the first time, if you are a fan of cricket then this is an absolute must-watch.

The film is directed by James Erskine (One Night In Turin

) and includes plenty of footage from the 1981 ashes series, a joy to watch as a fan of England’s cricket team. From The Ashes starts with Ian Botham’s brief captaincy of the England team, and then moves on to the captaincy of Mike Brearley, leading the team in the Ashes against all the odds.

Among the footage are also interviews with all concerned, including Kim Hughes, the captain of the opposing Australian side.

All the old favourites are there, Ian “Beefy” Botham, Chris Tavare, Dabid Gower, John Emburey, Dennis Lillee (on the “other” side) and of course Bob Willis, who is every bit as awesome as anyone you might see these days.

From the Ashes is now available on DVD