4 Star CG Animation That will Blow you out the Airlock. 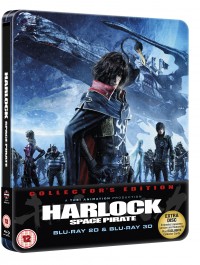 From Toei Animation and directed by Shinji Aramaki (Appleseed, Appleseed Saga: Ex Machina, Appleseed Alpha) comes the 2013 Japan release of the best CG, I have seen (especially in 3D).

Some time in the distant future or the distant past, Humans went in search of their destinies and colonised the galaxy but with so many humans out there, as humans do, they scour it for resources. Now with 500 Billion of them there is nothing left and humanity starts its decline as the birth rate falls away. They have the bright idea of returning to Mother Earth.

The Earth has trouble with 6 Billion now, so 500 Billion just isn’t going to work, so we do what we do best, fight over it. Until an Alliance is made the Gaia Communion (with a lot less humans left that is) and Earth is made sacred and off limits

to all humans. To prevent various factions of humanity from immigrating back to Earth, an elite wing of the Gaia Fleet was created to defend Earth, the Deathshadow Martyr Fleet, led by Harlock who manages to save a dying alien race (Nibelung) who give their advanced technology to Harlock, creating the Deathshadow ships with the use of dark matter and an observer/engineer Mimay. Harlock does his job of defending the planet admirably until he feels betrayed by the people who gave him his ward. His feelings are strong and he does all in his power to stay true to his command, but with tragic consequences, which he instantly regrets. It also changes the

It is now 100 years since that event and the Gaia communion are in full control of the situation as earth glows blue in the silence of space. Erza the head of it has plans on bringing down the immortal space pirate Harlock and his crew and his brother Logan volunteers

to infiltrate Harlocks crew. (he feels must atone for the accident he caused years ago that crippled his brother and pertinently damaged the love of their lives Nami who now exists as a hologram.

The most wanted criminal in the galaxy must be brought to justice and Logan tries his hardest to become useful to their captain before he puts his plan in action to have a fresh start after he stole 100 detonators and place them around the galaxy. This will turn back the hands of time and he believes that it will be the best for humanity and he must show what the Gaia sanction has been hiding from the rest of the human race.

With stunning graphics, awesome space battles and just beautiful scenery you are in for a 107 minute treat from start to finish. Disk one has the dubbed version whereas Disk 2 has the subtitled Film, something for everyone.