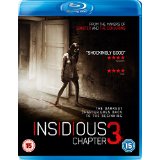 Insidious: Chapter 3 is written and directed by Leigh Whannell (Saw, Insidious) and is set a few years before the haunting of the Lambert family from the first film, Insidious.

Chapter 3 is a prequel which gives us a little insight into the history of gifted psychic Elise Rainier (Lin Shaye – A Nightmare on Elm Street, There’s Something about Mary).

When a teenage girl named Quinn Brenner (Stefanie Scott – No Strings Attached, Wreck It Ralph) turns up on Elise’s doorstep looking for assistance in contacting her recently deceased mother, Lilith (Ele Keats – Snowflake, Frankie and Johnny), Elise is reluctant to help her.

She has problems of her own in the form of a vengeful spirit which she accidentally picked up while using her powers to help recover from a tragedy in her own life and has since vowed never to use her ability again. 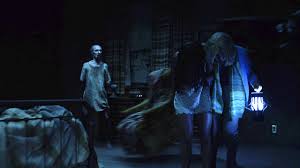 However, Quinn has continued to try to contact her mother herself and has managed to grab unwanted attention in the process. After a terrible car accident, she finds herself bedridden, with both legs in plaster and the focus of ongoing supernatural phenomena.

After a particularly disturbing incident, her father Sean (Dermot Mulroney – The Grey, About Schmidt) goes to beg Elise for help and together with Spectral Sightings, Specs (Leigh Whannell) and Tucker (Angus Sampson – Mad Max: Fury Road) they will do everything they can to save Quinn. 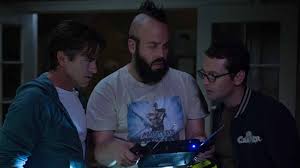 This is one of those rare creatures, a prequel which happily stands up to the rest of series on which it is based. The story is very interesting, well written and the tension is well built, I did nearly fall off my chair a couple of times.

The special effects are good too, the monsters suitably scary and the overall effect is very glossy and polished, but without losing the atmosphere. There are also plenty of special features included. Very compelling viewing and great for a night in front of your TV with a bucket of popcorn.

“Be very careful. If you call out to one of the dead, all of them can hear you.”

Insidious: Chapter 3 is available to buy now on DVD and Blu-ray and a triple pack DVD including all three films.