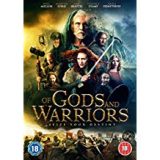 Of Gods and Warriors is written and directed by David L.G. Hughes (Hard Boiled Sweets) and was originally titled Viking Destiny. It is referred to as such in the special features.

Helle (Anna Demetriou in an impressive feature debut) is the only child of King Asmund (Andrew Whip – The White Princess) and Queen Alva (Victoria Broom – Marcella, Different for Girls) and the one true heir to the Viking kingdom of Volsung.

Yet she is unaware of her true lineage, for Helle was switched at birth with her cousin Hakon (Taylor Frost – Genius), her evil uncle Bard (Timo Nieminen – Ängelby) having convinced King Asmund that a female heir would weaken the kingdom. 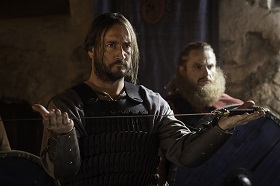 As Helle grows into womanhood, the King realises his mistake. She is strong, brave and good, and the best choice to succeed Asmund on the throne. Trained in the art of swordplay by her fathers loyal retainer Lord Soini (Will Mellor – Two Pints of Lager and a Packet of Crisps) she soon becomes a threat to Bard, who has designs on the throne himself and has Asmund killed before the 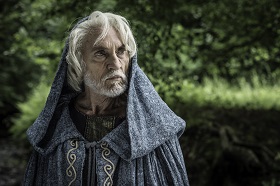 On the run and framed for the murder of the King, Helle seeks guidance from the god Odin (Terence Stamp – The Adjustment Bureau, Big Eyes) to gain the training and wisdom she needs to take back Volsung and fulfil her destiny.

Of Gods and Warriors is a thoroughly enjoyable watch. Packed with lots of enthusiastic fight scenes it is very satisfying.

It is filmed in an interesting style, quite unusual for the genre, crisp clean lines and precise settings and backdrops.

The scenery is breathtaking and although there are places where you can tell it is relatively low budget, it does nothing to detract from the entertainment. There is a surprisingly good cast too, with a standout performance from Anna Demetriou who is certainly one to watch for the future.

If you are a fan of fantasy adventure and Vikings then this is well worth adding to your collection.

“Remember, how dark the forest, there is always a path through it.”

Of Gods and Vikings is available to buy now on DVD and Blu-ray.