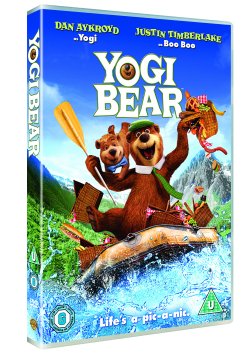 Eric Brevig has made better films than this, such as Lost Boys and Men in Black; but saying that this is true to the feel of the Hanna Barbera cartoon as one of the special features points out.

The setting is Jellystone park as usual (if you have never seen the original cartoon.).

The only place on the planet where there are two bears capable of speech, and one with the IQ that is higher than the average bear, (to paraphrase the original cartoon); Yogi, Dan Ackroyd (Blues Brothers 1&2) is fixated with acquiring the campers pick-a-nic baskets whilst Boo boo, Justin Timberlake (Shrek the Third) tries to reason logic to something that never listens.

There are many escapades and contraptions built by yogi for the acquiring of the aforementioned pick-a-nic baskets, only to find out that all his efforts are in vain as the corrupt Mayor Brown Andrew Daly (Semi Pro) has bankrupt the city and the only way to make money is to rezone the park thus selling it to loggers.

This is where Anna Faris, Rachel (Scary Movie 4) and Tom Cavanagh, Head Ranger Smith (Scrubs) try to come up with a plan to stop the sale of the park, whilst Ranger Jones T.J. Miller ( Gulliver Travels) works naively with the mayor.

For anyone under the age 12 this will be a romp in Jellystone Park. Older people will prefer the original cartoon because the ability to do something that has already been done is never the main attraction: All hail the space shuttle.

The CG is good but has been better applied in other films such as Shrek. The actors do a good enough job for the under teens, but there are a few points where I giggled but not from where I usually giggle from.

All in all this is a 4 star film which all the family will enjoy. Whether it is a classic that’s up to you to decide.

Available to by on DVD