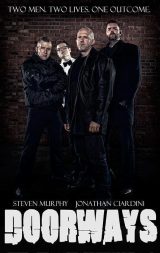 Diplomacy of the Fist

Doorways is the first film by writer, director and actor Steven Murphy and what a way to start, as he uses his life skills to bring a story that is close to his heart. Done on a non existent budget, his story shows that you don’t have to throw money at a project to make a really good film. Throw in a cracking soundtrack and you are on a winner.

Baldwin (Todd Von Joel, EastEnders) and his girlfriend Mel (Natalie Elisha-Welsh) and his best mate (Jonathan Ciardini) have just left the cinema and

head home down the dark streets of their home town. Baldwin keeps taking the mickey out of his friend as he reviews the film they have just seen and Baldwin is very derogatory to his friend who lags behind and he encounters some young lads and their leader. Things don’t go well for the friends as they get beaten up and Baldwin’s friend is humiliated.

Two men are at Charlotte’s door warning her that her husband must be out of  the pub doorman business in one week. Then we see Gavin (Paul Moss), Dave (Jordan Mooney, K-Shop), Craig (Steven Murphy)

and Milo (Christopher Brand, The Holding) get ready for work at the pub run by Wayne (Sean Pogmore, The Tolpuddle Martyrs) who thinks he is top boy but they all think he is an idiot.

Meanwhile Baldwin is dropping off a suit for his best friend who has decided after the events six months earlier that he has to show some masculinity. To this end he has

had training to become a doorman, much to the bewilderment of his Mum (Caroline Piggott) and Dad (Andy Evason, Valley of the Witch). Balwin hasn’t helped either with his choice of suit for his friends job.

His attire gains him nicknames like Harry Potter and John Travolta (From Saturday Night Fever) and not in a flattering way. The guys aren’t needed tonight as Wayne has cancelled the band that were due to play, so they all disperse and it is just Craig and Harry Potter on the door. The only friendly face is that of barmaid Jenna (Maria Theresa Rodriguez, Cockneys vs Zombies), who suddenly become Harry Potter’s obsession.

But by the second day the brooding Craig takes Harry Potter under his wing and educates him on the etiquette of being a doorman that works with Craig. Now as the days count down w

e see Craig unravelling in front of Harry Potters eyes as fights break out and Craig doesn’t seem to have an off button. When he is at home he is always trying to please his wife who always speaks from the bedroom. He blames the men who visited the house for her condition.

He wants his revenge.

As the days count down you will be drawn into the lives of Craig and Harry Potter until the twisty bloody conclusion of this film.

A great start to a career that is bound for greater things. 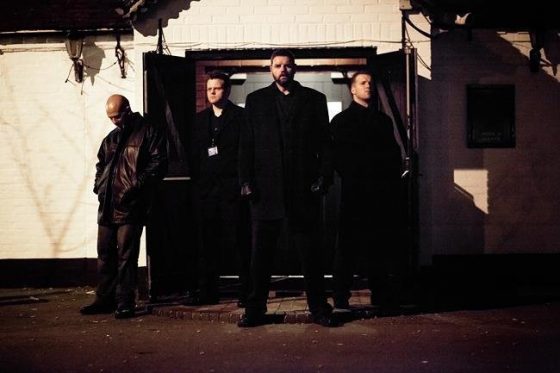