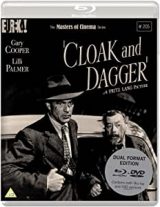 (Love in the Underground)

Filmed just after the war ended, Cloak and Dagger is a true tribute to the men and women who risked their lives in occupied Europe during WW II as part of the O.S.S. (Office of Strategic Services). From the legend that was Fritz Lang (The Woman in the Window, Der Mude Tod, Human Desire, Spione) and Eureka’s Masters of Cinema comes a tale trying to bring the Nazi nuclear war machine to a grinding halt.

It is late on in WW II, in Europe the Germans are up to something and the resistance are keeping an eye on them as they start moving huge amounts of Pitchblende and Monazite by trains. This information is sent to the Allied forces in Britain and the USA. In Washington Col

Walsh (James Flavin, The Restless Breed) tries to make two and two from all the information on the German activity, so he goes to see his old college buddy who would be able to understand what the Germans are up to, Prof. Alvah Jesper (Gary Cooper, High Noon, Man of the West, Wings)

viable nuclear weapon and they must be stopped so that the Americans can get it first.Walsh explains that he is a member of the O.S.S. and he needs Jesper to volunteer to help get a famed physicist out of Switzerland after she escaped Germany, a Dr Katerin Lodor (Helene Thimig, The Locket, The Angel with the Trumpet) who is recuperating in a hospital.

Our new spy under a new pseudonym flies out to the neutral country where he is intercepted by an underground agent Trenk (J. Edward Bromberg, The Mark of Zorro) who tells him who and where Lodor is.

After Jesper speaks with Lodor about getting her to the USA, something goes wrong and her cover is blown and she is kidnapped. 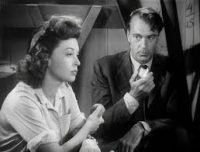 Things do not go as planned so Jesper has to find another way to thwart the German war machine. This is where Gina (Lilli Palmer, Murders in the Rue Morgue, The Four Poster), Pinkie (Robert Alda, Bittersweet Love) and Prof. Polda (Vladimir Sokoloff, For Whom the Bell Tolls, Twilight for the Gods) come into play, people who may be their only hope of success.

A pure espionage film with Nazi agents, guns and suspicious activities. Love it 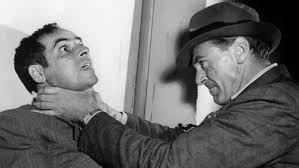 Cloak and Dagger is available on Dual-Format