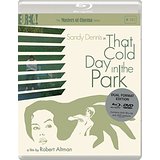 Eureka and the Masters of Cinema bring us an overlooked and forgotten film by the burgeoning film maker Robert Altman (M.A.S.H>, Gosford Park, The Long Goodbye, Nashville, 3 Women). This film is a look into the female psyche and how an obsession takes over you and their quarry.

Frances Austin (Sandy Dennis, Who’s Afraid of Virginia Woolf?) is a thirty something wealthy single woman who socialises with a much older circle of friends. She entertains in her plush apartment that sits across from a park with nice views. With her part time helper Mrs Parnel (Rae Brown) and her husband (Lloyd Berry, April Fool’s Day) they set up dinner for their guests Dr Stevenson (Edward Greenhalgh), Mr. Ebury (Frank Wade) and others.

Whilst everybody is tucking into their meal Frances goes to the window to see if the boy (Michael Burns, 40 Guns to Apache Pass) she spotted  earlier was still there and he was, but now it is pouring down and he still sits there on the bench. Frances points this to her guests but they are indifferent to his plight. She wants to intervene and makes excuses for everybody to leave and agrees to meet up at bowls later in the week.

She takes her head scarf and umbrella and heads for the park. After getting his attention and calling him over, she offers her apartment for him to dry off. He duly takes her offer but says nothing. In her apartment it is Frances that does all the talking (literally) but she is incessant as she helps him strip off his clothes. She feeds him as he sits there in a big blanket. He still hasn’t said anything and his face is hard to read the expressions on his face. She tells him his clothes will not be dry until morning and she has a spare room for him to spend the night and that she would bring him breakfast in the morning, with a nod he jumps into bed and settles down like a little boy.

In the morning the key turns in the lock and in comes Frances with the breakfast. She pops out and he enjoys his new surroundings and when she come back she has bought him a set of new expensive clothes. They start to have an uneasy relationship through the day and start to get along, but when the lock turns in the lock for a second time things start to take a different tack. As we find out the boys secret when he visits his sister Nina (Susanne Benton, Catch-22) via the window and fire escape and when she finds that he is missing things turn…

This is some great acting by the two leads Sandy Dennis and Michael Burns as they act out their entirely different roles in this film. A great way to make yourself feel creeped out and with the Masters of Cinema bundle it’s great addition to your film collection.

HOW FAR WILL A WOMAN GO…to possess a 19 year-old boy?

·         English subtitles for the deaf and hearing-impaired

·         PLUS: A booklet featuring new writing and archival images