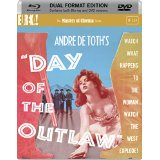 End of the Trail Western.

#124 in Eureka’s Masters of Cinema’s series brings alive the book, Day of the Outlaw by Lee Wells. Andre De Toth (The Stranger Wore a Gun) takes this story and develops characters that stand out from the screen as we see the story of the end of the trail town trying to survive it’s winter. 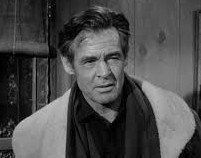 Bitters is a Wyoming town of twenty or so inhabitants, and Blaise Starrett (Robert Ryan, The Wild Bunch, The Dirty Dozen,Battle of the Bulge) has fought hard to clear the state of undesirables so that he can raise his cattle.

What he hates is farmsteaders and how they just turn up and stake a claim and start erecting barbedwire fences, interfering with his livestock as they roam the plains feeding.

, House on Haunted Hill) a stubborn farmer that doesn’t want to back down on the raising of his fences. But it is with Hal’s wife Helen (Tina Louise, The Stepford Wives) that Blaise has the biggest quarrel, as at one time they were lovers and the only way that Blaise would take her is if Hal was dead and Blaise is happy to oblige in that area. 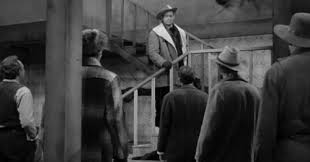 The farmers are brave enough to confront Blaise and his foreman Dan (Nehemiah Persoff, Some Like it Hot) in the bar but Blaise shouts them down and gives them the lecture on how it was himself and Dan that made this land safe for the homesteaders to just turn up and take the land. 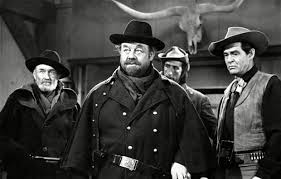 It is the next morning and Hal and a couple of other farmers are there waiting to see if Blaise will make good on his threat to burn Hal’s wagon-load of barbed wire. Gun are about to be drawn when the door flies open and in charge seven men brandishing rifles. Their leader is Capt Jack Bruhn (Burl Ives, Cat on a Hot Tin Roof, East of Eden, Fantastic Mr. Fox) and he leads a bunch of psychos consisting of Tex (Jack Lambert, Kiss me Deadly), Denver (Frank DeKova, The Mechanic), Pace (Lance Fuller, This Island Earth), Vause (Paul Wexler, Suddenly) Shorty (Jack Woody, Springfield Rifle) and the young Gene (David Nelson, Peyton Place). 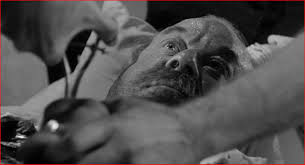 Bruhn runs his gang with an iron fist and he needs to as the gang has been in the saddle for months with the cavalry hot on their heels. But Bitters is the end of the trail. His men are baying to get at the whiskey and the women but Bruhn forbids them either.

This is a cracking western with Ryan and Ives taking centre stage.