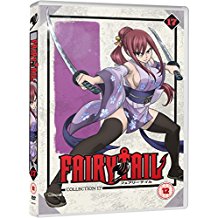 Shinji Ishihira (Log Horizon) brings us the conclusion to the “Grand Magic Games” Arc from the manga by Hiro Mashima (Monster Soul) and what a conclusion it turns out to be. Whilst the Fairy Tail guild battle in the last day of the games, Natsu and Wendy and the two Lucy’s battle to get out of the palace after escaping the dungeons.

As Gajeel takes on a possessed Rogue using an unseen technique of two dragon forms at once he manages to separate the dark energy from him, leaving him defeated and Fairy Tail moving up the leader board of the Grand Magic Games.

Inside the palace Mercurius, the Hungry Wolf Knights regroup to battle Natsu

and Wendy and future Lucy as they try and get to the the other Fairy Tail members. But they are held up by wave and waves of soldiers as Natsu sweeps them aside with his usual gusto. Until a strange shadow spreads across the floor and the soldiers and Hungry Wolf Knights disappear into it, leaving Natsu and the others alone.

A figure appears out of the shadow who turns out to be another time traveller and he is out to get Lucy who he claims caused the dragon horde that rules his  world seven years in the future. He is Rogue a very dark Rogue, he claims that Lucy kept the Eclipse 2 closed so that the horde couldn’t be wiped out and that fate is set and she will always

close the door, he strikes out with a shadow spear aim straight at Lucy. At the Last second future Lucy throws herself in front of Lucy and takes the fatal strike.

Enraged Natsu and future Rogue battle while Wendy and Lucy escape to find the princess, while the rest of Fairy Tail battle in the streets as the other guilds try to take them down.

Check out how the future is made and will the Eclipse cannon fire in time to save the land. 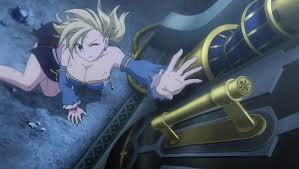